Matt Garza has been cleared to start throwing, that’s encoraging!!!!

The Cubs are off to a great start, they continued their winning ways by defeating the Colorado Rockies yesterday, 4-2. Christian
Villeneva and Dave Sappelt hit two homers. Starlin Castro got a hit and the rest of the Cubs were firing on all cylinders.
It’s an encouraging sign that the Chicago Cubs are in first place in the National League, going 3-1. Not bad indeed.
Looking through the spring training stats, I don’t see the Cubs near the top of the standings, but they’re still trying to find ways to win. Ok, I’m a realist in thinking this trend will not continue into the regular season once other teams big bats get swinging, but this is a very encouraging sign.
Wellington Castillo has been real impressive. His OBP is .429 and although it doesn’t lead the team, he’s shown to be the most consistent player so far.
So yeah, the Cubs aren’t doing anything flashy but chipping away and as the cliché goes, “Doing the little things” and getting the job done.
I wouldn’t want Dale Sveum’s job deciding who to cut.
Today, the Cubs take on the Dodgers. Game time is 3:05
Play Ball!
–Mark 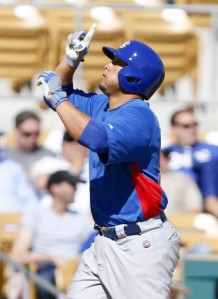 I met someone on the weekend who has season seats for the Cubs. Now, you might think, “So what?” but to this baseball fan I thought it was really cool that I talked to someone who has actually sit in the Friendly Confines. You know what he said to me? “Two in a row, brother.”
He called me brother. Then I began to realise that maybe that is what Cubs fans mean to each other. We’re some form of family that stretches across nations and seas and continents. We share a belief that someday we’ll be there when this drought of a championship ends. Yup, we believe.
I’m a little disappointed with Apple TV. We bought it thinking that we could watch every Spring Training game, or at least the ones that are broadcast. Apparently we can’t. It’s available on the X-Box but not Apple TV. That sucks. I feel like I wasted my money. Not that it matters too much. We’ll have the regular season and I can watch the spring games online, but disappointed by it all.
In other news, The Cubs lost a close one to the Dodgers but the good news is that they continued to show the emerging talent pool with Wellington Castillo, Nate Shierholtz and Darnell McDonald all hitting home runs. Up next they play the Rockies today at 2pm.
Alfonso Soriano could be a Yankee. I think it would be a great fit and you know that would open up some cash for the Cubs. I think it’s inevitable.
Play Ball!
—Mark 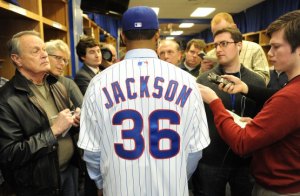 Edwin Jackson
The Chicago Cubs off season signing of Edwin Jackson to a 4 year 52 million dollar deal brings a lot of hope to the organization. In the wake of a Anibal Sanchez re-signing with Detroit, the Cubs went and signed a quality pitcher in Jackson.
Keeping in mind that this is Jackson’s seventh stop in the majors many feel that the Cubs will be his last stop and hopefully bringing the first World Series to the club since 1908.
Edwin Jackson was drafted by the Los Angeles Dodgers in 2001 as an outfielder, but eventually emerged into a pitcher.

So, the real question here is Edwin Jackson worth the money the Cubs invested in him? Or will the Cubs be hanging their heads in four years? I was questioning this deal, but the more I think about it, the more it makes sense. Edwin is only 29 years old, so he’s just getting into his prime which the Cubs will need in a couple of years when more prospects make it into the majors. Right now, Jeff Samardzija and Matt Garza are their guys, so bringing Edwin on board gives balance to the rotation. Nobody’s denying that Edwin’s, um, been around the bases but everyone needs that chance so why not the Cubs.

I think Edwin’s going to emerge as a great leader. He’s won a ring with St. Louis and he could win another with the Cubs. 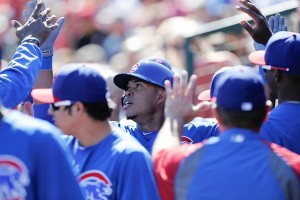 Cheers all around after Luis Valbuens hits a Homer

I knew there was a catch somewhere. The Angels weren’t playing, Mike Trout, Josh Hamilton, Albert Pujols. It’s still an encouraging win and a true sign that baseball is back and the groundhog was wrong-there’s only two weeks left of winter.

It’s kind of like David vs Goliath here, but if there is any reason for being optimistic is the fact that the Cubs rising stars shone through and showed Cubs fans everywhere that there are good things coming in the years ahead.

Jorge Solar showed signs of the great player he will be. He got a hit,run and an RBI. Heck, Brett Jackson had a pair of triples.

Nobody cares about what happens before April but today the Chicago Cubs are number 1. 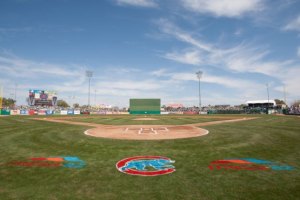 The Cubs kick off their Arizona league schedule with a match up against potential AL favourite and Josh Hamilton’s new residence, LA Angels.
It’s going to be a tough outing, but also a chance to see future stars like Jorge Solar, Josh Vitters and Brett Jackson.
I’m disappointed that it’s not available on MLB.TV but there is the Blue Jays game on.

The Cubs will play 39 games this spring including one against a WBC team on March 15th. This also is the final year at HoHoKam field. The Cubs will start playing at Mesa next year.

The Angels and the Cubs are playing three times during Cactus League play. Travis Wood gets the call to the mound for todays game.

So, some of the things to watch for is
• Starlin Castro reducing his errors
• Where will Velbuena end up at?
• Can Darwin Barney continue with his Gold Glove season last year?
• Anthony Rizzo can turn into the Bat for the Cubs
• Do the Chicago Cubs call up Josh Vitters and Brett Jackson, keeping them in the lineup?
• What about Jorge Solar?
Game Note: Ian Stewart will undergo an MRI after an injury due to a mild strain. Results are expected Saturday.
Every Cubs fan knows this is a rebuilding year, but we do expect to see their stars of the future shine this year. It all begins today.

Ian Stewart is out for 10-14 days with a mild quad strain. At least he’ll be ready for opening day.
Play Ball!
–Mark 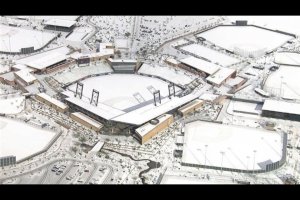 The Cubs are snowed in.

Who would have believed it? Snow in Arizona? When I saw the pictures I thought it was Toronto. First the pope resigned, then the meteor over Russia and a ball of light in San Francisco. Now snow in Arizona.

You have to see it to believe it. 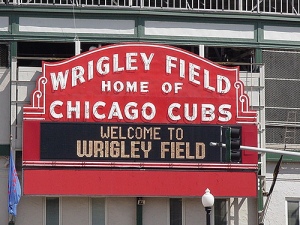 The annual tradition in our household is to celebrate opening day by taking off work and having a party. We call it our, “Cub’s Day.”
It’s not really about watching the Cubs play(Yeah, it is)it’s more about saying,”See ya!” to another Canadian Winter and as many of you know, it’s been a struggling winter throughout our beloved countries.
We enjoy the first BBQ of the season which in the past involved ribs, burgers, steaks and other mouth watering char broiled delicacies. We also have ballpark snacks like nachos with cheese dip and peanuts and caramel corn.
This year, we’re going to try to bring Chicago to our household by having authentic Chicago cuisine. I’ve never been to the city but I believe that Italian sausage is a delicious tradition.
I found a recipe online and here it is:
Chicago Style Peppers and Sausage
It calls for Jack Daniel’s but we’re going to try it with beer.
If anyone has other recipes or suggestions let me know.
A lot of people scratch their heads as to why we take off Opening Day, especially in this country, but I think part of it is spending the day with the family and the other part of it is taking the day off of work to watch the Cubs!

This is great to see. I’m too young to remember Sandy, but looking through his stats is amazing what he’s acomplished. Way cool!!!!!

When the Dodgers posted the first picture of Sandy Koufax suit up in Dodger Blue, I got excited!  I had seen him Sunday at Camelback Ranch with a white long sleeve t-shirt and jogging pants.   Unfortunately we had to leave Sunday so we did not get to see him Monday all dressed in Dodger Blue.  But that is OK, just seeing the pictures,  I got super excited.  I could not wipe a big smile off my face while I work on President’s Day.

The pictures below are from Dodger photographer Jon SooHoo who does an excellent  job.  check out all the photos here: Sandy Koufax greeted with applauses in the clubhouse at Camelback Ranch Shimada, the ever young Jim Hill and Sandy Koufax… 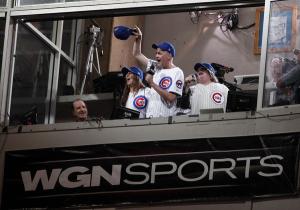 The Cubs deal with WGN is coming up for renewal at the end of 2014. Many Cubs fans, including myself or I did until recently, (but that’s another story) rely on WGN for the Cubs broadcasts. Many of you know that north of the border in Canada, baseball isn’t the hot commodity it is in the US. Ok, the Blue Jays are going to smoke this year in the AL East, but in order for my Cubs fix, I need to watch WGN on digital.

WGN is the oldest affiliation going back to 1948. Hockey Night in Canada goes back to 1952, so WGN has that beat. I think they have to renew their contract in order to keep their fans happy.

That being said; we got rid of cable. So no more WGN. I instead subscribe to MLB.TV This year, I can watch over 200 ballgames in my living room in HD! That’s right folks, we had an old 27inch tube tv and now we upgraded to 40′ of HD, I can see the blades of grass and the colour of Soriano’s spit out in the field. I’m excited about this because it’s the first time and I’m looking forward to using all the features and studying every single thing that happens on the field.

WGN is also changing the way they handle the 7th inning stretch. Again, for those of you who don’t know, a celebrity comes in and sings,”Take me out to the ball game.” and proceeds to share in sometimes intelligent banter in the broadcast booth. Not anymore. Programming director Jim Oboikowitch says,

“I think we definitely want to focus on former Cubs players, people that are Chicago natives, people who know baseball and who are Cubs fans,”