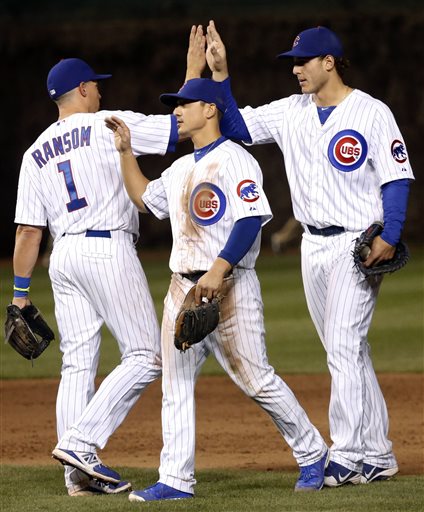 The Chicago Cubs kicked off a home stand in dramatic fashion last night by beating the San Diego Padres 5-3. It was however, the play of Cody Ransom, a former Padre that sparked the Cubs offence. Ransom connected in the second inning for a homer that got things going for the Cubs. In the end, Cody had two runs, two hits and two RBI’s. Not bad for a kid picked up on April 15.

His defensive play was outstanding too.

“That barehand play saved the game for us,” Barney said. “It’s nice to have a guy like [Ransom] who knows how to play the game the right way and knows the situation and knows who’s running.”

The great thing about this win is the Cubs did it using the bottom of the order with guys like Cody Ransom and Darwin Barney.

“These guys are Major League players, and somebody’s gotta hit in the bottom of the order,” Padres manager Bud Black said. “They got us.”

Of course, Darwin Barney continued with his stellar play since coming back from an injury completing two hits and two RBI’s

The closer role has been of some concern for the Cubs, but Kevin Gregg, with the coolest glasses in the league got the job done. I’ve never been a huge fan of Gregg, but he’s quickly earning my vote as the regular closer for the Cubs.

“For whatever reason, guys are getting the job done and getting big outs when we have to get outs,” Sveum said of his collection of relievers. “That’s the key is making pitches when you need to.”

Maybe the answer is to juggle the relievers around? If it’s working, and it has been, the Cubs have put something together. This is their 4th win in five games and although they’re record is 10-15 and 41/2 games back. In April, that’s not a bad place to be. Let me tell you folks and non believers, Matt Garza is coming back into the rotation soon, which is going to make things extremely tough for Dale Sveum because I believe “If it ain’t broke, don’t fix it” philosophy but on the other hand, it’s a good problem to have.

“Let’s be honest — we’ve played some really good teams in the first month,” Samardzija said. “You’ve got the defending world champs [the Giants], you’ve got [the Rangers], you’ve got the Brew Crew at their place, and Cincinnati. We knew we’d have to come out and be on top of our game in April.

I always thought this was cool.

From the second Rick Monday was drafted, his place in history was written in stone. Monday was the first player ever selected in a draft for amateur talent in 1965. The Kansas City Athletics selected Monday who had a stellar career at Arizona State University. His selection marked a turning point in baseball. No longer would the richest teams select and over pay for the best talent, teams would select players in order based on their record from the season before. It was a new era.

The era also was a time of great upheaval. The Civil Rights Movement was in full swing and the Vietnam War was reaching its zenith. These two great moments in history created a combustion of frustration and protest unlike anything America had seen since the Civil War. Monday reached the majors quickly in 1966 at the age of  20. He made his debut for… 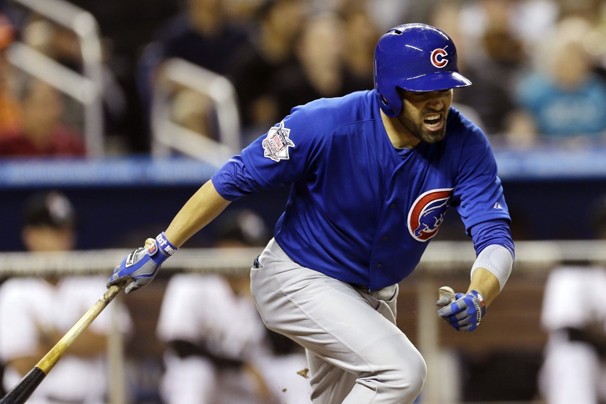 The Cubs are on a roll. They beat the Miami Marlins 3-2 yesterday, making it three in a row and improving their record to 9-14. Travis Wood earned the win after pitching 6 innings and David Dejesus drove in the winning run to seal the victory.

“This is the big leagues. Big plays in big situations,” said Sveum. “They’re what you need all the time in close, one-run ballgames. We had a couple of them tonight, and that was the difference — great plays.”

I think the key to the Cubs winning, is scoring early. They scored the runs by the third inning.

“It’s good. Everybody works together,” said Castro of the defense. “That’s why we’re winning games. It’s the group.”

Carlos Villanueva gets the ball when the Cubs have a chance for a sweep at 12:10 today. It would be great, but let’s keep in mind, it’s only the Marlins.

“We had a tough time [here] last year. When things started snowballing out of control last year, it was in this place,” said Sveum. “It’d be nice going home with a four-game [winning] streak and five out of six.”

“The swing was where I wanted it to be, and I was just staying consistent with it,” said Rizzo. “It was a good win overall.”

The Chicago Cubs are now on a two game winning streak with the help from Kevin Gregg. It was lights out for the Marlins.

All right, now don’t get too excited over this mini winning streak, it is the Miami Marlins we’re talking about here, but we’ll take it.

Even though the Cubs are last in the Central Division and sitting six games back, it’s way too early in the season to panic. This is a great series because Cincinnati is playing Washington and the Milwaukee is mixing it up with the Dodgers. Chicago can gain ground in this series.

Scott Feldman still has to earn my faith in him but he summed up the feeling in the clubhouse afterwards,

“Winning is just much more fun than losing,” said Feldman with a laugh. “Hopefully this is the start of a little hot streak here and we can keep playing well.”

I know you were the Cubs big off season acquisition. I know many consider you an amazing pitcher and believe me, I’m not arguing that at all; Edwin Jackson-you make me nervous.

The Chicago Cubs beat the Miami Marlins 4-3 last night. It was a tough win as many of Chicago’s games have been this year. Close games that could have gone either way.

In the second inning, Edwin Jackson had the bases loaded with one out. That’s not cool, Edwin. If it were the top of the sixth I would understand. Your arms getting tired, “Take me out coach, I’ve got nothing left.” but come on, the second?

“It was just a matter of trying to battle back,” said Jackson, who signed a four-year contract with Chicago in the offseason. “When your team goes down and scores first and then you give up a run, as a starter, you just have to go battle.

“We did that tonight. I battled. The team battled, and that was a great win for us.”

Yeah you came back and you struck out four through six innings. That’s cool.

Here’s what I’m suggesting: Dale Sveum should sit you for a game. I’m not one to judge a manager’s decision, but he should sit you in favour of someone else. Maybe until I stop swearing at the television. It’s not nice to swear.

Now, let’s talk about Luis Valbuena. He’s come into third base in favour of the injured Ian Stewart. What are you going to do,Dale? Four HR’s in eighteen games.

What are you going to do?

Now will people believe me when I say that the Cubs can get a shot at the wild card?

I brought the car in for servicing yesterday and got a lift from the service advisor to work. Apparently, the Cubs are the talk of the town because this advisor couldn’t stop talking about the stellar play of Carlos Villanueva. He was blown away by how the Cubs are playing this year.

The word is getting out!!!

If a baseball team is going through a rebuilding process, then the way to do it is lose by one run and /or fight back in games by keeping it real close. The Cubs have done it this year. 1-0 to the Reds. That’s a hard loss to take.

Jeff “The Shark” Samardzija has been a, well, a shark this season for the Chicago Cubs. Yesterday, he cut his finger in the first inning, but fought through it. Ok, for those of you who don’t get the importance of a pitcher cutting his finger, it’s not a good sign.

“It got compressed a little bit and a little baby cut,” Samardzija said, downplaying the injury. “It was a little interesting. It wasn’t so much the feel of it, but more so the liquid coming out of it than anything else. They let me pitch, which was good. Everything physically was fine. It was more aesthetic than anything else.”

Yesterday’s game wasn’t as much as what the Cubs did wrong, but the Reds just showed their experience.

“We seem to find a way to keep the game close and scrape across a couple runs when we need them,” Samardzija said. “You’ve got to take it as a positive. You need to look at what went well and build on it. We’ve played some really good teams over the last few weeks. … We’re right there and need to stay positive and finish this month strong.”

I couldn’t have said it better myself. That’s going to be the key to the season.

By the way, from now on when you read Shark, I’m automatically assuming you know it’s Jeff Samardzija. It’s just too hard to type Samardzija.

Ok, any suggestions for a Carlos Villanueva nickname? He rocks the mustache.

From the fantastic Vine Line Blog:

Carlos Villanueva has been solid in the Cubs rotation. (Photo by Stephen Green)

Offensive woes and fielding mishaps have hijacked the headlines for the Cubs as the baseball season reaches the one-month mark. It’s hard to ignore the fact that the team has scored just 61 runs, 13th in the National League. And considering how much time has been spent reinforcing the basics in the last few years, it’s even more surprising that the defense has committed 17 errors in 18 games, second most in the NL. Those stats will need to improve if the team hopes to do better than the 59 wins they managed last season.

But there is some cause for optimism in Chicago thanks to a surprisingly dominant starting rotation.