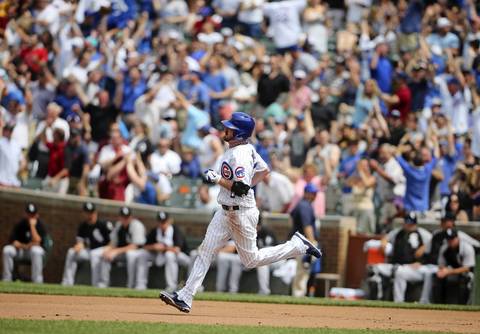 There must be some mojo working at Wrigley Field. it could be the Rolling Stones staying in Chicago, but yesterday Travis Wood belted a Grand Slam Home Run to power the Chicago Cubs to an 8-3 win over their South Side rivals.

Yes, you read it right folks, Travis Wood, pitcher for the Cubs hit a Grand Slam!!!!

That’s his second shot this year.

“We take pride in our hitting and being able to help ourselves out,” Wood said. “We just want to be able to handle the bat so we’re not a dead out. We can try to go out there and eventually help ourselves out and get something going.”

Nate Schierholtz and Luis Valbuena each hit homers in the win.

So, the Cubs won the Crosstown Cup and even though it’s only for bragging rights, it’s a motivator that can probably land them a wild card spot. After all, they’re only 10 games back and if anyone remembers a few years ago when they were 10 games behind at the beginning of August and battled hard to win the division.

They have the potential to do it again.

So, what are the thoughts about Cubs pitchers powering the ball into the streets?

“They hit every day at home, they hit on the road, they have good swings,” Anthony Rizzo said. “It is fun to watch. We just have to get the pitchers up.”

Maybe Travis Wood should hit third in the rotation.

The Cubs have won four in a row heading into today’s matchup against the Diamondbacks. Matt Garza’s on the mound. Game time is 2:20pm eastern.