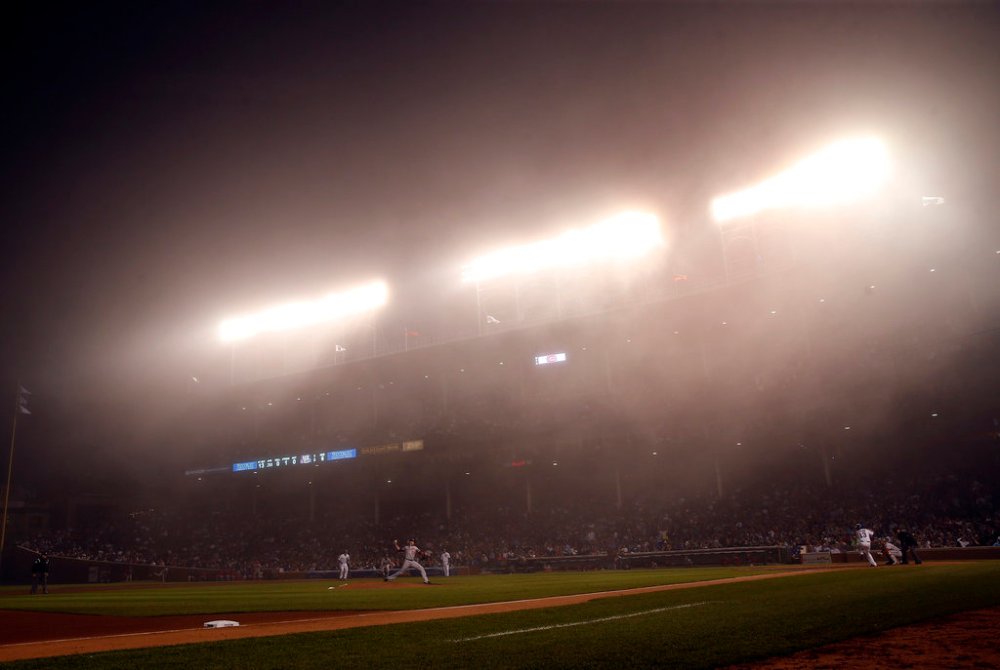 It may have been foggy at Wrigley Field last night, but the Cubs saw everything clearly, carving out a 5-3 win over the Washington Nationals.

Cubs’ sensational pitcher Travis Wood struggled and was yanked in the sixth, but the great thing about yesterday’s win was that the Cubs managed to put some runs on the board and not rely solely on pitching.

Justin Ruggiano cranked a two run double in the seventh. You don’t hear his name often but Ruggiano has been steady and going through the rest of the year, could provide an anchor to a possible Wild Card spot. For those interested, the Cubs are now 8.5 back. Some readers may think the Cubs don’t have a shot, but you never know, do you?

“It was nice to help out,” said Ruggiano, who missed time this season with an injury and posted his first-multi RBI game since April 23. “You always feel like hitting in front of [Anthony] Rizzo, you’re going to get pitches to hit. You want to make sure you swing at strikes when hitting in front of Rizzo because he’s been on fire. In my mind, he’s an All-star, he’s been an All-Star.”

As usual, the team of Anthony Rizzo and Starlin Castro continued their successful bid for a spot in the All Star Game. Rizzo went 3-4 while Castro chipped in with two RBI’s.

Junior Lake literally hit the wall and was taken out of the game. There appears to be no sustaining injury and should be back in the lineup soon.

So, the Cubs are on last year’s pace with a record of 33-44 The question of, “Are they the same team?” No. The Cubs have some new faces, but they’re playing with a whole different vibe then last year. The games are closer and when the team does lose, they’re fighting back and getting some pretty decent pitching. They may or may not get a Wild Card spot, but are laying the groundwork for future stars Kris Bryant, Jorge Soler, Javier Baez.

Other detractors might think that the Edwin Jackson experiment has failed, but maybe he was overpriced but every now and then he can show flashes of brilliance.