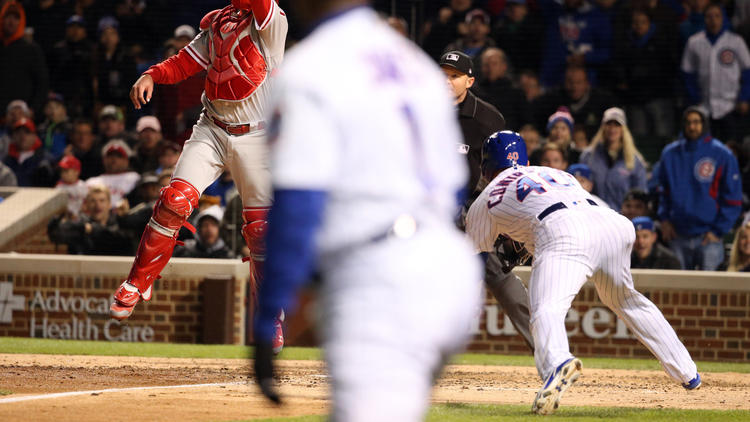 Just like their amazing World Series run, the Cubs came from behind this time to shock the Philadelphia Phillies 5-4.  Despite the Cubs uneven April, they’re starting May off with a different kind of poise.

“That was the theme last year — that we never quit,” Cubs starter Jake Arrieta said. “If we still have outs left, if we’re looking at a deficit, we still feel confident we’re not completely out of it. With our lineup and the ability to string three, four, five quality at-bats together at one time, there’s a chance to score multiple runs in one inning. Us establishing that we can come from behind early in the season in April, moving into May is a big boost for us.”

It’s not a matter of never quitting, I don’t think. The Cubs are a talented group of players that just find ways to utilize those talents and move forward in games. Whether it’s the youthful exuberance of Willson Contreras or the mostly stoic Arrieta, the Cubs have those soft skills to go along with the mechanics of the game.

“You plug into this guy,” Cubs manager Joe Maddon said. “As he learns to play with his hair on fire — maybe not a forest fire, maybe just the burning bush or something, I don’t know — he’s going to learn how to control all that.”

Of course he was talking about Contreras’ two run double that fuelled the comeback.

“Willson is savvy enough to know a ball hit up the middle like that to the shortstop’s left, he was anticipating a throw to first base and he continued to come around,” Maddon said. “We got lucky — that ball hit right on the back of the mound.”

Now, there are two kinds of managers in the game. There are the kinds that would shun a heads up daring run that Contreras did in the sixth, opting more to play it safe and keep Contreras at third but with the speed of Willson it was a no brainer. The other thing to think about is he could have easily been out at home. It all came down to luck.

“By the time I was going to home plate, I saw the catcher going for the baseball and I tried to get around the base, and I did,” Contreras said.

So, John Lackey takes to the mound this afternoon to try and win the series. We all know that the rotation’s struggles are showing cracks. It’ll be up to the order to pull out the stops. With every game, I’m convinced more and more that other teams have finally caught on to the Cubs. If Chicago’s going to do any damage this year, they’ll have to dig down deep and show just how good they can be.

“Our guys are good, they’re well, they’re going to continue to pitch better,” Maddon said. ” … They’re going to pitch very similar to what you’ve seen the last couple of years. I really 100 percent believe that. In the meantime, let’s keep moving it further along.”