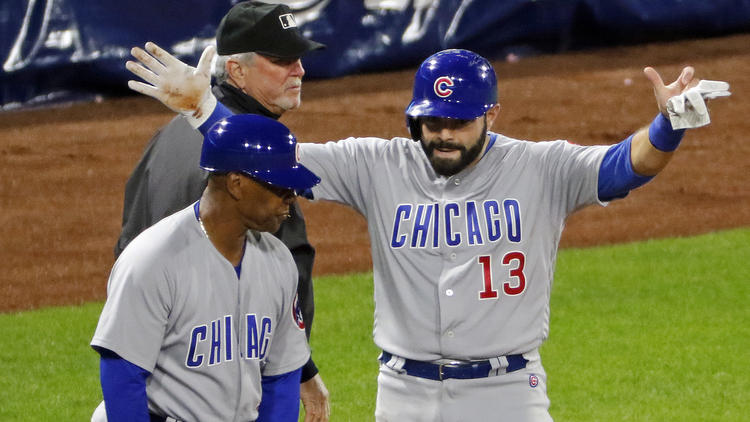 The Cubs keep it close and scratch out a 1-0 victory over the Pittsburgh Pirates. It came down to a pitching duel between Gerrit Cole and Jose Quintana. Quintana struck out six over six innings of action, while Cole pitched a goose egg over eight solid innings, the Cubs hung on.

“Cole pretty much had no-hit stuff today,” Alex Avila said. “The way he was locating with 97 (mph fastballs), slider, curveball, changeup, he was excellent. You just had a feeling we weren’t gonna have too many opportunities against him. And if he made a mistake, we weren’t able to capitalize on it. He had unbelievable stuff. It was like, try to outlast him, keep the game where it was until we got to their bullpen.”

“He’s not overwhelmed by the situation,” manager Joe Maddon said. “Been there, done that. He’s able to slow the game down really well. … Had a couple punchouts before that [the triple], so kind of a tough night before that, but hung in there. Give him credit for maintaining.”

The Cubs are hanging on to their first place spot in the National League Central with a four game advantage over the St. Louis Cardinals. It’s not really a place they’d like to be with expectations for this season running on an all time high, but they’ll take it.

The Cubs will finish out this series today before meeting the Brewers in a crucial series. It’s going to be a tough month with the rest of the Central playing spoiler to the North Siders. I’m hoping for a Cleveland/ Chicago rematch in the World Series but with Cleveland riding a 14 game winning streak, things could take a turn for the worse if the Cubs expect to repeat as champions.

Although stranger things have happened.