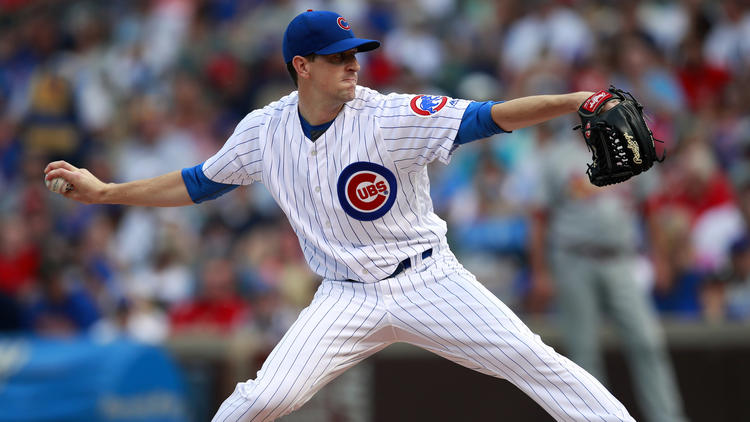 The Cubs may not be as dominate as they were last season, but quietly they’ve done Cubs things that have pushed them passed the 80 win mark and are moving away from the rest of the National League Central. Take for example, yesterday’s 4-1 win over the St. Louis Cardinals.

This has been an interesting, if not crucial series against the Red Birds. There was John Lackey‘s rightful outrage against Umpire Jordan Baker that led to both Lackey’s and Willson Contreras‘s ejection. That was the Friday afternoon game and the intensity carried forth into yesterday’s game.

If you’re a loyal Canuck Cubbie follower, it’s no secret that Kyle Hendricks is my favourite player in baseball. His style has been compared to Greg Maddux, and yet I think it’s something entirely different. The fact that Hendricks pitches in this modern era of the game is a really special thing indeed. Nothing over 90 MPH and a very rare fast ball. Yesterday, Hendricks pitched his longest game of the year.

“It’s good to feel strong, even at that last pitch,” Hendricks said. “I still felt good. I still had plenty in the tank. That was my takeaway from today.”

Yet, he’s not always a lights out kind of pitcher. Sometimes he has his bad games but since he’s come off the disabled list, his confidence is growing and since his debut own 2014, Hendricks is becoming a team leader and perhaps someday we might see him at Cooperstown. It was a huge contrast in styles between John Lackey’s wild outing and Hendrick’s cool demeanour.

“We’re somewhat aware of where the teams are at,” Hendricks said, “but it’s not what we’re focused on. We’re focused on the field, what needs to be done, pitch to pitch. That’s really where our focus is and where it’s stayed. So two games, five games, whatever it is, it is. We have to win ballgames down the stretch. Period.”

It’s the right poise and confidence at the right time of the year.

“Everything was working from the side,” Cubs manager Joe Maddon said of Hendricks, who has a 2.42 ERA in 11 starts since coming off the disabled list. “They were having bad takes. They were taking pitches that were called strikes. His fastball was the best he’s had all year. … His confidence could not be higher.”