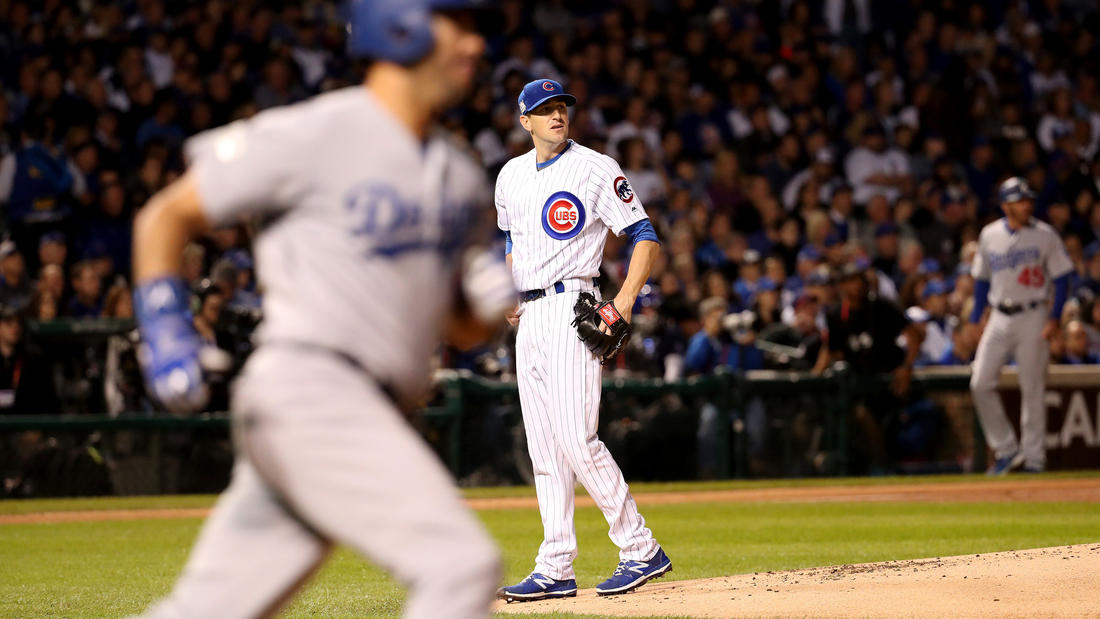 It’s easy to point fingers when things don’t quite go as they planned but the truth is that after last night’s heartbreaking 6-1 loss to the Dodgers, the Cubs, who are down 3-0 in the NLCS and face elimination tonight, well, they’re just getting beat by a better team.

“I don’t think there’s any need to change anything,” Chicago’s Kris Bryant said of the club’s approach on Wednesday. “I think we can play even more loose, because what have we got to lose? No one’s expecting us to come back except the guys in this room. I don’t know if it’s a comforting feeling, but I guess it takes a lot of pressure off us because no one’s expecting us to win.”

He’s partially right. They changed things up and they still lost. For some strange reason, the Cubs can’t seem to hit anything thrown in their direction. They’ve been here before and know what’s at stake. All of us arm chair quarterbacks can question Maddon’s bullpen decisions or lineup changes but in the end it comes down to the Cubs not being able to capitalize on situations.

“I’m not going to sit here and throw a lot of hyperbole your way,” Cubs manager Joe Maddon said. “It’s just about our guys. Your back’s absolutely against the wall. Tomorrow is a Game 7. We have three or four Game 7s in a row coming up right now. … We need to gain some kind of mental momentum, and obviously that’s our last chance to do it [Wednesday].”

So, even if the Cubs had an amazing first half and coupled with their incredible second half of the season, the outcome would still be the same. They would have faced the Dodgers somehow and probably still got beat.

Tonight, they have Jake Arrieta on the mound. The former Cy Young winner will look to extend the Cubs season. Remember, the Cubs have been down in a series before.

“It’s just taking one game at a time, really,” Arrieta said. “There is no use in dwelling on what happened the night before or a couple days ago and trying to look too far into the future. I think that’s the mindset that we’ve kind of carried throughout the season, and it’s worked out really well for us.”

“I wouldn’t sit here and say we’re going to lose,” Carl Edwards said. “We’re still confident. We’re ready. It’s a very funny sport. And we’d like to say the tables can turn at any time.”