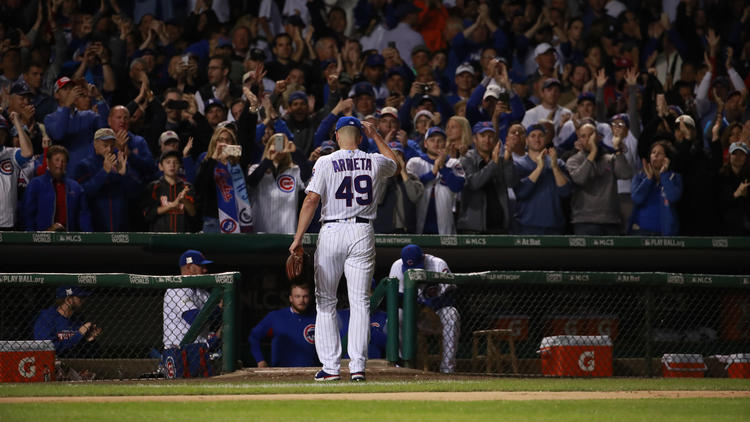 The Chicago Cubs on the brink of elimination, at home, fought off the Los Angeles Dodgers to force a game 5 tonight. Yesterday, the Cubs launched three home runs on their way to a 3-2 victory. It wasn’t easy but starting pitcher Jake Arrieta struck out 7 over  7 and Javier Baez launched two home runs, while Willson Contreras contributed a monster of a moon shoot to help the Cubs win the game.

“You’ve got this many fans on their feet, pulling on the same side of the rope,” Arrieta said. “It breathes some added energy. I’m thankful they came out and had the energy they did. It really helped us tonight. “It’s not an ideal situation, but I’ve been in this situation before and I enjoy it.”

It’s also a situation where Arrieta might have pitched his last game for the North Siders, but if it is, the former Cy Young winner will go out on a high note.

The game wasn’t without controversy after Curtis Grandson swung at a pitch and the ball bounced on the ground but Grandson thought it was a foul tip, so the Dodgers argued and the call was overturned.

The crowd knew it and well, so did Joe Maddon and that’s why after he argued, he was tossed from the game.

“The explanation was eventually — eventually it turned into hearing two sounds. Not one of them saw a foul tip or heard — thought it was a foul tip. It was based on two sounds, which I totally cannot agree with that process whatsoever. When you have 40-some thousand people, it’s late in the game. The other sound could have come from some lady screaming in the first row. I have no idea. I can’t buy that process,” Maddon said.

The umpire admitted his faux pas afterwards, but if the Cubs lost the game on that call, then there would have been even more controversy and that wouldn’t have been good at all.

So, tonight the Cubs will send Jose Quintana to the mound to face Clayton Kershaw in another loser stay home, which in this case won’t be that far. It’s going to be tough facing the best pitcher in the game but this is why the Cubs brought Quintana in.

“That guy’s been pretty dang good for us and I know he’s going to go out there and battle for us, that’s for sure,” added outfielder Kyle Schwarber. “We’re really looking forward to having him out there.”

On a sombre note, on Tuesday, leader singer Gord Downie of the Tragically Hip passed away from glioblastoma  at the age of 53. He was considered by many as the poet laureate of Canada. Downie  and the Hip wrote many songs about our nation and were essentially the Rolling Stones of Canada. They never made it big on the Stateside but were even bigger in the hearts of many Canadians. It’s not uncommon to hear their music blasting from car speakers every summer, in fact it’s a tradition and last night during a candle light vigil in Springer Market Square, it was no different. For me, their music and his words are a reminder of my college years or just about every party I went to, there was a Hip tune playing.  In honour of Gord’s passing and to give the Cubs a little courage, taken from the 2004 Grey Cup: