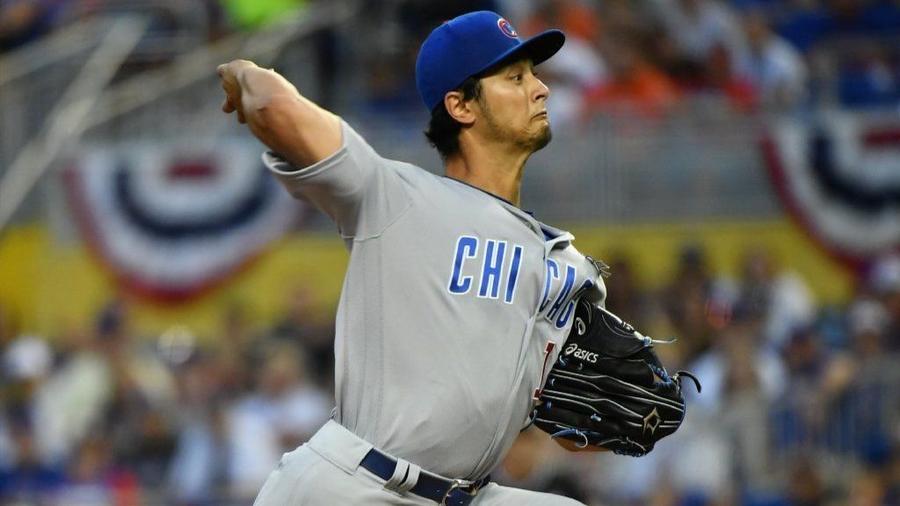 The importance of starting pitching was never more on display than in last night’s extra inning 10-6 all nighter win by the Chicago Cubs over the Miami Marlins. In this case, the hot ticket free agent signing of Yu Darvish came up short lasting just a mere 4 1/2 innings. Call it stage fright or just plain Opening Week jitters, but Darvish looked mortal in his Cubs debut.

“He wasn’t really sharp overall,” Joe Maddon said. “A lot of pitches for 4 1/3. He showed glimpses where the command was good. His fastball command was off a little. I would say, overall, he didn’t have his best stuff tonight.”

Five runs on five hits, that’s a big, “Whoops, sorry about that guys.” moment. I hope he bought his teammates a round or two afterwards.

When you think about it, Darvish has a lot of pressure put on him being the big money man that he is for the Cubs.

“It seems like every time I pitched the first game in Japan things went not so well,” Darvish said through his interpreter. “I don’t know why that happened. … It could have been a location problem with my pitches. I don’t think I was able to command whatever I wanted to, in terms of fastball.”

So, to show the depth in the Cubs this year, and this is why they’re going to be scary good,  the offence picked up the pieces with Kyle Schwarber, Ben Zobrist and Kris Bryant contributing in big ways for the team.

Schwarber’s monster blast combined with Bryant’s 4 run 10th inning was just what the Cubs needed to bring the fireworks and put on display their ferocity and endurance especially after Friday night’s epic outing.

“We did some really nice stuff,” Maddon said. “How about Zobrist? He’s swinging the bat as well as anybody on the team right now. Schwarber hits a big bomb, and [Bryant] continues to have good at-bats. It’s almost like some of them are trying way too hard. Let’s just back it off a little bit, see the ball, don’t try to do too much. Get back to the whole field — we’re getting too pull conscious too early.”

Don’t forget that Mike Montgomery appeared in his third straight game. I don’t think people imagined that this was the kind of start to 2018 they had in mind for the North Siders.

“I was not expecting to get in there today,” Montgomery said. “In the eighth inning, all we had left was Strop, and the Marlins tied it up. When we didn’t take the lead in the ninth and the 10th comes around, everybody said, ‘Hey, can you go?’

The Cubs had better dial back these extra inning nail biters and save them for October because we all know what extra inning Octobers can do for these Cubs.