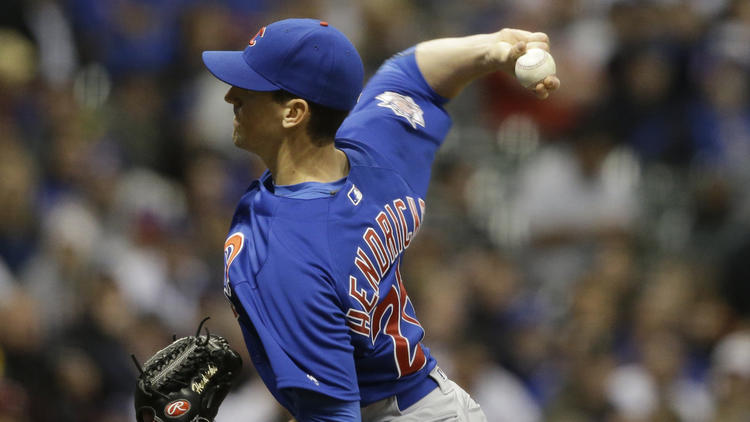 So, it wasn’t the outcome the Chicago Cubs had hoped for in their 5-4 loss to the Milwaukee Brewers but it sure was a fun game for the most part. I mean, c’mon Javier Baez‘s Little League Home Run. I know he’s the player that causes headaches for managers and third base coaches but, man if there’s a spark plug in the Cubs’ offence, it’s got to be him.

Whatever is wrong with the Cubs so far in this young season, I believe is slowly getting fixed. Let’s forget the fact that Kyle Hendricks wasn’t his usually stoic self. After all, he did give up two homers which, in fact, was only the second time he’s done that in his career. I know it’s hard for me to pick on the guy when he doesn’t play as well as he usually does, but in this case it looked like the Brewers finally figured him out. I think too the problem with a pitcher who doesn’t throw hard, it becomes much more problematic when they make mistakes.

Hey, it happens to the best of us(If the rest of us could throw 90MPH with pinpoint accuracy)

It also happens to the best Rookie of The Year/NLMVP/World Series Champion/All around decent guy, Kris Bryant when he bobbles a throw to first baseman Victor Caratini, I mean  they can’t be Bryzzo everyday especially when the other half is out with back stiffness.

“I honestly shouldn’t have thrown it,” Bryant said. “[Perez] was safe all the way. I was trying to make a play there. It didn’t work out. Sometimes that’s how it is. It’s a little frustrating.”

Yeah, it’s frustrating. This April has been frustrating but with Yu Darvish getting the ball today, things will get better. They have to get better, right? Problem is , Anthony Rizzo will probably be out day to day. Look on the bright side, if you’re feeling frustrated about the Cubs, turn it over to the Masters.