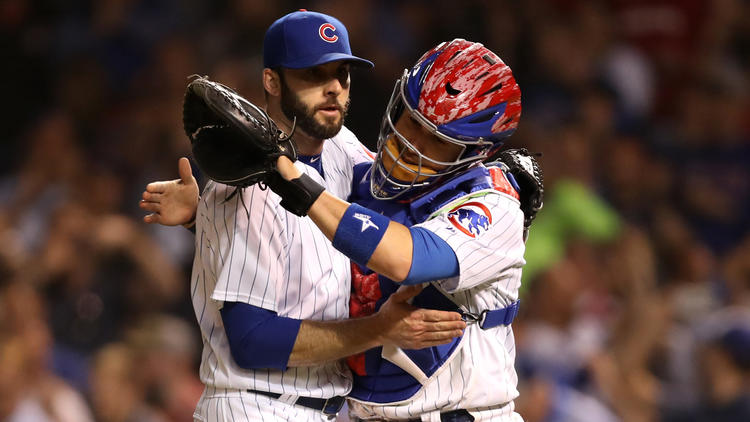 It was all there last night in the Cubs 4-3 win over the Miami Marlins. Kris Bryant‘s running skills (even some tickling ) Victor Caratini and David Bote got into the game and did a great job, oh and then there was Ben Zobrist’s throw from the corner that kinda started the faux bench clearing scrum.

“It was rather entertaining,” Cubs manager Joe Maddon said. “There was no reason for it. I was surprised. There was no animosity. It wasn’t a dirty play, it was nothing. [Dietrich] is out by 52 feet, [Caratini] has got the ball. [Dietrich] bumps into him, play over. It was kind of surprising. I don’t think there was anyone who got heated. it probably required more tickling than punches.”

The Cubs have strung two in a row. Should we dust off the parade gear? Um, I’m going to wait until they do it against the Washington Nationals or St Louis Cardinals. No offence to Marlins fans but winning back to back games against them amounts to nothing. The Cubs should’t have a problem with them.

Bryant had the go ahead run in the eighth and man, is it good to see him back in business.

“He’s a great base-runner, he’s probably one of the best in the league,” Cubs first baseman Anthony Rizzo said. “He shows that time and time again. It gets overshadowed because of everything else he does. But his base-running is something every young player should look at.”

For a tall guy, he moves real quickly.

So now the Cubs have got their hands full. Jason Heyward is on the concussion list and Bryant could see time out on the field. This is what’s going to test the Cubs patience and skills. Heyward is huge in the lineup (not his plate skills). We’ll see just how well the Cubs can weather the storm while he’s out.

“He popped it on that fly ball the other day in St. Louis on the home run by Dexter,” Maddon said. “I knew he was not feeling 100 percent. We just have to go through protocol and take our time with it.”

Jose Quintana gets the ball today. Here’s hoping the Cubs can sweep the Marlins. Right now, they’re 1.5 games out of first but yet it feels a lot more.