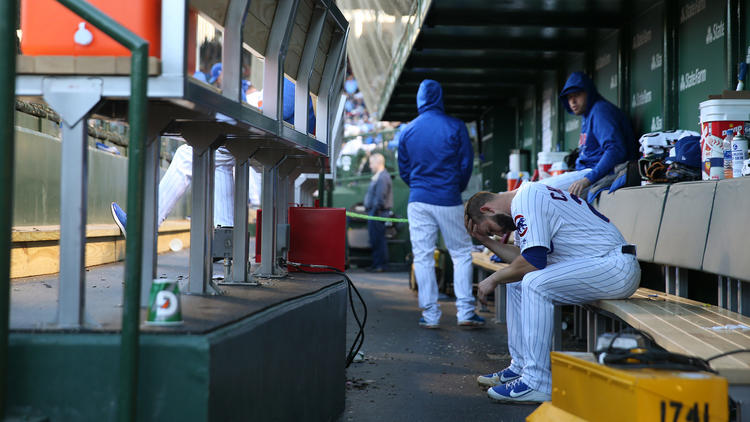 Well that was an ugly game, now wasn’t it? In their 10-1 loss to Cleveland, Cubs pitcher Tyler Chatwood gave up six walks in just over two innings.

“He’s got a busy delivery when he throws the baseball — it’s busy what he does with his hand,” Cubs manager Joe Maddon said. “It’s something he’s done for a while. It’s not something he can change easily. … You can see the movement from the side, how good it is. We’ve got to harness it somehow. I spoke to him on the bench and reassured him that it’ll be fine. He knows that. Man, that’s good stuff. We’ve just got to get him in that zone.”

It’s been his Achilles Heel all season and even though it looked like he’s been trying to overcome it, last night it was bad.

“It’s definitely frustrating, because one at-bat I’ll feel really good, and the next at-bat I’m fighting myself,” Chatwood said. “It’s even more frustrating that I’m putting us behind a guy like [Trevor] Bauer, the way he’s throwing the ball right now.

Although the Cubs played well behind the plate garnering ten hits, the problem was not advancing the runners. If a ball club chalks up that many hits, they’ve got to get those guys home. 0-10 with RISP isn’t going to cut it.

“I’m trying to force pitches rather than just letting it happen,” Chatwood said. “Little mechanical thing. I’m drifting down the mound. I don’t know where I’ve created that bad habit. … Last time I was able to stay into rhythm. Tonight I was battling rushing rather than staying back. It’s just keeping that feeling and maintaining that.”

The ironic part is that the Cubs were expecting huge dividends from their starting rotation and so far this season, they’re 27th in team ERA with 3.42

That has to change.

Is there any truth to the rumour of Manny Machado in the pinstripes?

“What we have here is a special unit, a special team,” Albert Almora said. “Like [Machado] said, and like I’m saying right now, that’s up to the front office guys to make those kinds of decisions. We have a great team here as we stand, so we’ll see what happens.”