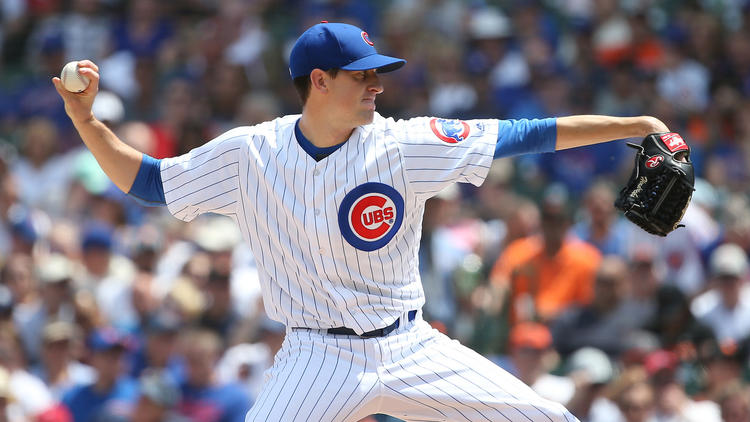 Kyle Hendricks isn’t a hard thrower. I’ve established this throughout the years here at the Canuck Cubbie. His stuff is legendary with his sub 90 MPH pitches and calm demeanour, he quietly takes to the mound and goes about his business. In yesterday’s 6-2  win over the San Francisco Giants, Hendricks found a way to win.

“He’s so steady,” Maddon said. “He’s just the same guy. Right now, Kyle is throwing the ball as well as I’ve seen him throw the ball. The numbers are good. That high 86-87 [mph], occasionally 88 [mph fastball], because off of that, here comes that magnificent changeup. I’m a curveball fan. I still like that activated a couple more times. But, he just knows what he’s doing.”

The Cubs were in a slump and it was up to “The Professor” to get them back on track and he did just that by going seven innings and seven strikeouts.

“I made better pitches today,” Hendricks said. “In the past, I was throwing about the same, but too many bad pitches. The only [bad] one was 0-2 to Hernandez, I didn’t bury it enough down and in. Other than that, I executed what I was trying to do. In that sense, it was the best-executed game for me.”

The Cubs were in a badly need of a win after getting swept by Cleveland. For a team that’s not playing as well as anticipated, they’re still playing above .500 on both the road and at home. They’d be in second place in the west and right up there in the east. This is the danger I guess of us weird Cubs fans. I’m guilty of it. I get so excited about the least bit of happenings surrounding the team, “Oh My God, Joe Maddon got new specs!!!”

Yeah, that’s how bad I get with this team sometimes. This is still a good team and nothing stops me more than seeing Hendricks pitch. So, with the Cubs struggles at getting extra base hits and capitalizing with Runners In Scoring Position, I hope they can fix things and get back to the dominating team they once were.

“We’re not getting the bang for our buck,” Theo Epstein said before the game. “A lot of our extra-base hits and home runs are with nobody on base. We’re not performing at the same level with guys in scoring position. It should all even out.”