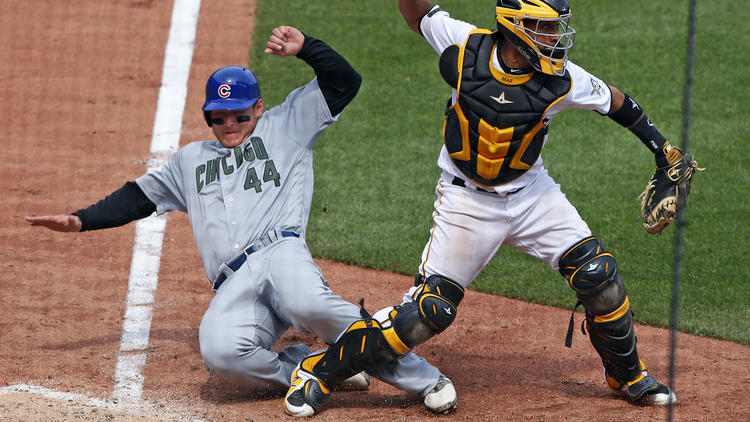 On a day where people paid tribute to the brave heroes who have served and continue to serve, it’s fitting that Mike Montgomery had the opportunity to step onto the pitcher’s mound and deliver the Cubs to a 7-0 victory over the Pittsburgh Pirates.

“I was just trying to make good pitches throughout and keep my mindset on giving this team as much innings as we could get,” Montgomery said. “Obviously, [Sunday] night and with the travel, the bullpen needed as much help as they could get, and I knew that. I was doing it for those guys.”

I’m glad it was Montgomery with the shutout. It couldn’t happen to a more deserving guy. In the wake of Yu Darvish‘s injury, it’s guys like Montgomery that should come through with the big stuff.

Speaking of big stuff, Anthony Rizzo got into a little bit of controversy after Rizzo slid home and swept the catcher Elias Diaz‘s leg forcing an errant throw to second, thus stopping a potential double play.

Was it wrong? Should Rizzo have not swept the leg? I’m biased on this one folks, Rizzo was doing what players do and that’s helping their teammates, nothing more. He wasn’t trying to hurt Diaz. A little friendly competition but what if he did hurt Diaz? Then it would have been a little different debate.

“You just say, ‘Man, are you all right? I’m not trying to hurt you there,'” Rizzo said of his conversation. “I think there’s a clear sense when someone is doing something with intent and trying to hurt someone [versus] just playing hard. I’m going to take the side of playing hard. That’s what I pride myself in.”

Of course we don’t know what Diaz’s response to that was, now do we?

“It’s the perfect play by Rizzo,” Maddon said. “My concern is they’re teaching fans the wrong thing. The fans’ reaction to ‘Riz’ the next time up indicates they think he did something wrong and that’s what’s so wrong about all of that. The player did not do anything wrong but because of new rules, it makes him wear the black hat for the moment. That’s how you should teach your kids to slide to break up the double play at home plate.”

The Cubs have won two in a row and now have the momentum heading into the final game of the series.

Do you think it was a bad slide?