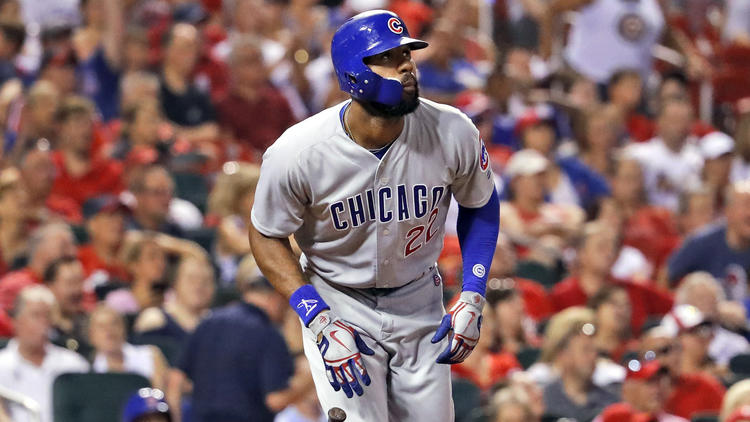 Jason Heyward launched his fourth home run of the season as the Cubs won the series from the Cardinals last night with a score of 6-3. it wasn’t the prettiest game but the Cubs did it.

“Love it,” Joe Maddon said of the clutch hitting. “Listen, that is my No. 1 priority offensively. Homers will come. Pitchers throw homers. When hitters try to hit homers on all the pitches thrown to them, the results are normally bad. Let pitchers throw you home runs. Be in position to hit the ball hard with two strikes. Understand they’re not giving you that pitch to drive out of the ballpark. Why not adapt? That’s where the action will come back into the game, that’s where you’ll get more movement, that’s where you’ll get the entertainment you’re looking for.”

On the pitching side of things, Kyle Hendricks snapped a  three game losing streak. He’s had problems giving up home runs but also has never let it get to him too much, he’s been able to bounce back and deliver solid outings, which is his MO.

“A couple years in the big leagues has helped that,” Hendricks said. “If it was early in my career, I might have a different thought process. It’s one of those things. I’m battling and getting really hurt when I make a bad pitch. There’s nothing I can do, I can’t get it back. That’s where my focus is now — the next pitch.”

But last night’s game was all really Heyward. He’s settled in this season and finally been able to quiet the naysayers. It’s been a rough go for Heyward since joining the Cubs a few seasons ago.

“What was that a 99, 100 mile an hour fastball? He got to it easily,” Maddon said. “He’s the guy that’s really ascended among the group. He’s made all the difference by hitting second and providing some big hits in the latter part of the game. He’s really good as the game gets in progress.”

So, the two big names were Hendricks and Heyward. The run support was there for Hendricks and Heyward came through in the clutch. A couple of other heroes were Ian Happ and Willson Contreras with two out RBI’s. Folks, those are the kind of plays that win ballgames in October.

The Cubs close out the series tonight on Father’s Day which I know most baseball loving Dad’s will be watching tonight. Bring out the blue bats and enjoy.