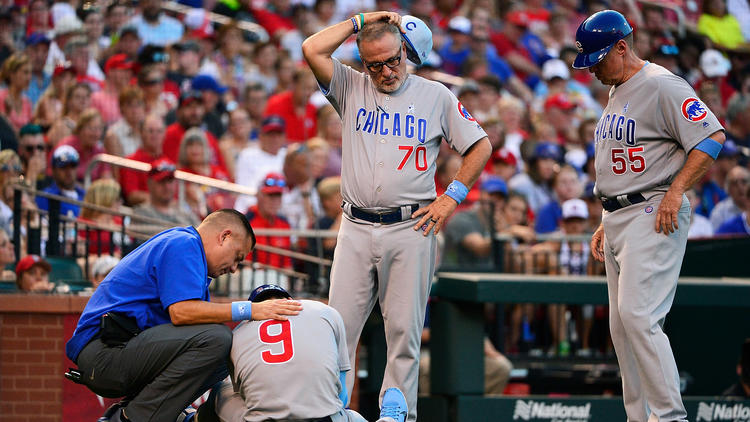 How great would it have been if the Cubs completed the sweep on Father’s Day of the St. Louis Cardinals? Two rivals, one on the way up, and the other, just being there. The Cubs lost 5-0 and remain a half game back of the Brewers.

A scary incident occurred when Javier Baez left the game after being hit by a pitch.

“I’m fine,” Baez said. “It’s just really sore. It got me really good right on the elbow. I thought the pain was going to go away right away, but it kind of numbed my whole arm and even my ribs. We’ve been icing it. It feels pretty sore, but I know I’m good.”

There was nothing funny about that. The Cubs haven’t hit as many home runs as they have in the past but they’ve made contact more. Home Runs are exciting but give me guys on base any day then going yard. Now, don’t get me wrong; going yard is incredible to see it’s not everything.

“I think it’s something we have to evaluate over a little bit of a longer period of time,” general manager Jed Hoyer said regarding the Cubs’ reduced power. “We haven’t hit as many home runs, and in theory that’s concerning, but it’s a small sample. Let’s look later on and see where we’re at.”

It’s not the Cubs biggest worry. You can spin any cliche you want but a win is a win. Last night, the Cubs couldn’t manage a run and that happens from time to time. They’re stringing together the wins when it counts and staying with the pack.

“We’re all out there trying to do our jobs and put ourselves in the best position to win a baseball game,” Kyle Schwarber said. “Getting on base is the simplest form of that.”

If the Cubs go on to compete this fall, it’ll be a more well balanced team than the 2016 World Series guys.