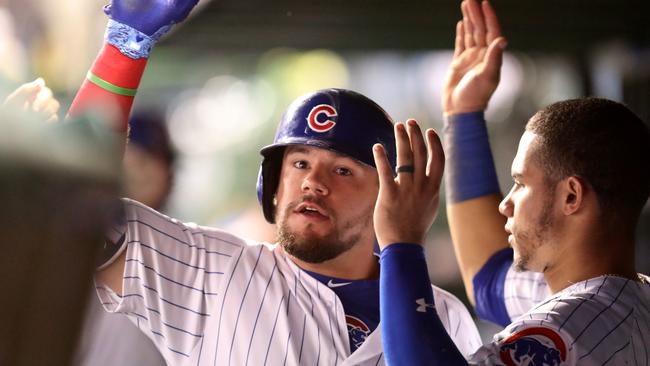 There’s a deadlock in the National League Central after the Chicago Cubs split a double header with the Los Angeles Dodgers. In the first game, the Dodgers won 4-3 and in the second game, the Cubs downed the Dodgers 2-1.

Splits are tough, man. What’s even tougher occurs when a pitcher messes up his back while taking his pants off. Take Brandon Morrow;

“It’s frustrating any time you can’t get out there, especially when you can’t go for something as stupid as taking your pants off,” Morrow said. “Getting hurt any time is frustrating, but when it’s not related to throwing a baseball, it’s even more frustrating.”

“We’ve just got to be able to drive in more runs,” Maddon said. “When you look at their left on base, it’s very similar to ours. It’s an industry-wide situational problem. We’ve got to do better. We had two good guys up there in Tommy La Stella and Albert Almora Jr. We liked both of those situations a lot. It just didn’t work out for us.”

Both scores were narrow margins and with the firepower that the Cubs have in their lineup, they need to get better in scoring more runs. Then there’s the case of Tyler Chatwood. The guy walks more than any other Cubs pitcher last season.

He’s a dangerous dude to have in the rotation. I don’t like that combination, give me Jon Lester’s ball in glove to first base schtick anytime!

“I felt good,” Chatwood said. “I think any time you can keep your team in the game and leave with the lead, it’s successful. Obviously, you want to go deeper in the game.”

The night game was a little different. Albert Almora Jr. was the hero giving the Cubs the win in the 10th with the walk off single.

“I just wanted to get it done. First of all, I wanted to go home and sleep. I wanted to do it myself just because it’s a little payback from the first game.” Almora said.

This season’s been weird. The Cubs weren’t doing so well at first and now they’ve slowly gained some momentum by doing the little things. Kris Bryant getting the triple in the seventh and Almora with the walk off. There’s also Kyle Schwarber who’s putting together a quietly good season.

“They bring their best against us,” Almora said. “To be the best you’ve got to beat the best.”