The trade deadline is coming up and there’s been a lot of discussion involving Kyle Schwarber. I’m going on record to say that I hope the Cubs do not trade him. What happened to Kyle at the start of the season was unfortunate with his season ending injury but the team has endured.

“Kyle is a huge part of our personality and our culture,’’ Epstein told USA Today. “It wouldn’t be right to trade him.’’

Of course we know money talks and rightfully so that he shouldn’t be discussing any trade deals. My take on a possible Aroldis Chapman deal is that the Cubs should not go for him. Sure, he can throw a 105 MPH rocket but his off field drama would probably weigh too heavy on a young Cubs organization. His arm would be a huge asset to a struggling Bullpen but at what cost and he would more than likely be a rental player.

Bleed Cubbie Blue has an interesting scenario should the Cubs deal Schwarber, it involves Tampa Bay’s Chris Archer. It would work. The only reason the Cubs would trade Schwarber is due to his defensive abilities. He struggles a bit but nobody is disputing his plate approach, the kid has the tools.

The trade deadline is less than two weeks away and there are many questions to be answered. The Cubs have built up a lot of prospects that they have at their disposal should they be in the market to acquire some more firepower at the deadline.

“We also haven’t touched certain parts of our prospect inventory. That will keep us really viable for every opportunity that’s still out there between now and August 1. Sometimes you can be in an uncomfortable spot if you haven’t done anything and you’re sitting there July 31 – August 1 this year – waiting for a ‘yes’ or a ‘no.’ It’s hard not to throw that last player in just to get a deal done if you haven’t done anything. It’s something to fall back on. It gives you the ability to say ‘no’ or draw a line if you need to. But it also keeps all our opportunities open. The prospects we moved weren’t in any other deals that we were talking about. We haven’t touched the prospects that we were potentially going to move in some bigger deals that didn’t come to pass and may be resurrected in the future.” Epstein said.

Right now, the Cubs are looking at an easy schedule when they face the Milwaukee Brewers and the Chicago White Sox back to back. if they want to make up any ground and lay the foundation for October, this is the time to do it. Dexter Fowler should be back sometime this series.

“It’s important that they send a strong message to the team,” veteran catcher David Ross said. “You have to (with) a team that is in first place and was four wins away from going to the World Series last year. You’re looking at the big prize at the end of the season.” 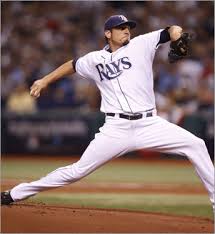 Pitcher Matt Garza was traded yesterday from the Tampa Bay Rays to the Chicago Cubs in a tentative deal that involves outfielder Sam Fuld and top prospects Chris Archer, Hak-Hu Lee, Brandon Guyer and Robinson Chirinos going to Tampa Bay. The Cubs also get Fernando Perez from the Rays.

I’ve got mixed emotions about this trade.  The Cubs are going to be serious contenders this year, giving the Reds a whole whack load of trouble, but the key word is this year.  Not next year or the year after, maybe Jim Hendry is trying to cement his legacy in Chicago, but I think he’s going about it the wrong way.

I think, and there will be few Cubs fans that disagree, that Jim Hendry made a bad trade.  If the Cubs go to the post season and make a great run for the World Series, I will go down to that shop in Syracuse and buy that Sammy Sosa jersey.  Ok, maybe not that extreme, but you see what I mean?  It’s the only way this deal will be good and then what about next year and the year after that?

What happened to Kosuke Fukodome in this deal?

On the other hand,  the good things about this trade is Matt Garza knows Carlos Pena.  Pitcher’s to First Basemen are like ice cream with caramel sauce.

The pitching is going to be amazing this year but the key word is this.