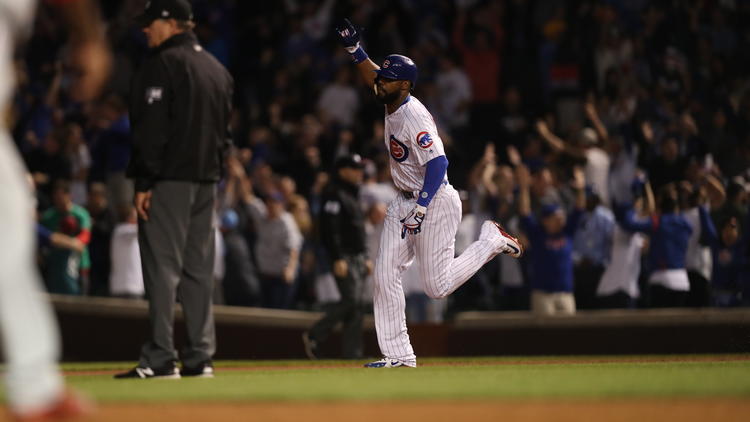 What makes baseball the greatest game on the planet? At any given moment, someone will walk off a hero. See what I did there? Last night, Jason Heyward had a walk off grand slam to send the Cubs home with a 7-5 win over the Philadelphia Phillies.

“Things do seem a little more clear,” Heyward said. “I keep saying it, but I’m trying to keep it simple, one at-bat, one pitch at a time, trying to make adjustments on the fly. It’s much easier said than done. I got a pitch to hit there and didn’t miss it. Pitchers don’t make many mistakes. I got one off a guy who’s really good and has good numbers and didn’t miss it.”

It couldn’t have been better. The guy’s had his share of struggles since signing a whopper of a contract with the Cubs a few years ago and after various stance changes and hitting adjustments, the guy’s been probably the Cubs most improved player even though they signed him because he’s such a good player, are you following?

“He’s a huge part of this team. He’s a guy who you can go up to and talk to. He’s going to give you his honest opinion. For him to be out there on the field and do what he does out there in the outfield and what he’s doing at the plate, it’s phenomenal. He’s a great human being.” Kyle Schwarber said.

Remember, Heyward was the guy in the dressing room with the famous speech that helped the Cubs win their first World Series yada yada yada.

What makes this one so special was that Anthony Rizzo predicted it a few moments before.

“I asked Cory Mazzoni, ‘Have you ever had a Major League win?’ and he said, ‘No.’ I said, ‘You’re going to get your first one tonight,'” Maddon said. “Rizzo was better than me. He had talked, talked, talked on the bench. I’m saying, ‘C’mon, just a base hit or double down the line’ and he said, ‘No, how about a walk-off grand slam,’ like a nano-second before it occurred. That’s baseball.”

It’s the stuff of legends. Two outs, bottom of the ninth bases loaded and what the hell?

The Cubs are a game back of Milwaukee and playing well at the right time.

Baseball. The greatest game on earth. 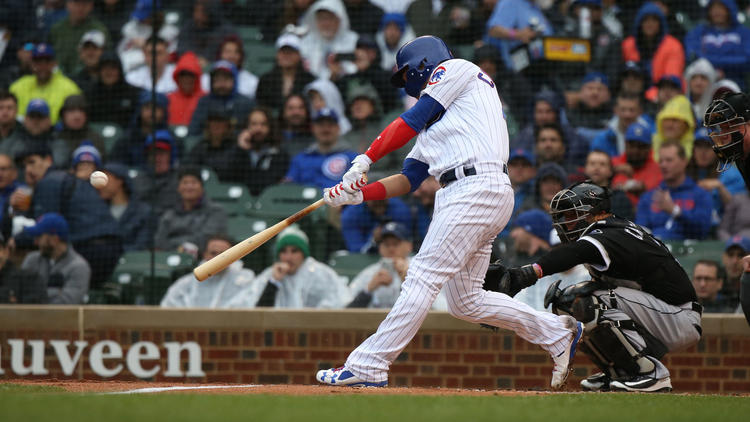 The Cubs are on a roll and when they beat the White Sox, that roll is like an avalanche. Yesterday, Willson Contreras and the Chicago Cubs downed the White Sox 11-2 but that wasn’t the best part; Contreras connected with a grand slam and finished the game with seven RBI’s.

“I love when he hits the ball to left-center, and when it goes out, it’s even better,” Cubs manager Joe Maddon said of Contreras. “My take on him is when he’s driving the ball in the gap, he’s on top of his game. That’s what I saw last year. That’s what I saw today.”

Of any teams, beating their crosstown rivals is always a milestone of the season and could help the team turn things around. The Cubs are 1.5 games back and see no signs of slowing down. They’ve won four in a row as well as Kris Bryant hitting his fourth home run in five games. It was a banner game.

The rivalry between the two clubs brings out the fierce competitiveness. It’s great for the city because few teams have that honour of crosstown rivalry. Mets/Yankees? Angels/Dodgers. It doesn’t have nor will it ever bring out that competitiveness with the teams. Families are split, friendships divided when it comes down to it. What if they played in the World Series?

“I’d love to be there for that,” Cubs manager Joe Maddon said Friday prior to the start of the intracity Interleague series between the two teams. “That probably is the epitome. When we got here, of course, the goal was to get there and win it, and we have [in 2016], and we’re looking to get back. To do it intracity like that would be pretty spectacular. Talk about energy — oh, my God. I hope I’m around for that moment to occur. I think it would be pretty spectacular.”

For now, these games are what matters. It’s about friendship, family and the love of baseball.

“It’s always fun. Any time you have a legitimate rivalry, it’s good, and it’s good for the fan bases on both sides, and it’s good for baseball. It’s entertaining. It’s interesting. I have not been here long enough, but I’m starting to catch the vibe. Even though the one team is not not doing so well, they’ll be ready to play.”

You know, for all the criticism the Cubs are getting this year and let me tell you that there is plenty, when the Cubs put the maple to the leather, they can really score some runs. Take for example, last night. The Cubs avoided a sweep against crosstown rivals the Chicago White Sucks. 12-5. That’s not a typo.

There’ll be glimpses this year of what the Cubs can do in the future. Mike Olt crushed a Grand Slam, his first ever! Anthony Rizzo and Starlin Castro chipped in like they’re supposed to do and belted homers each.

The key this year for the Cubs is to not look at the standings and focus on improving in each position. We know they’re going to be good in a couple of years, hopefully next year when the kids come up. For now, we’ll have to enjoy these games when the machine is working. That is working really well!

Yeah, it’s a work in progress and the Cubs won’t have every game played this well but to have moments when they shine like Rizzo, Castro and Olt did was the kind of games where fans should just soak it up and enjoy it.

“The White Sox had a lot of hits as well and we limited their damage — we did more damage than they did today,” Anthony Rizzo said.

No matter how badly the Cubs lose this season, there’s no denying that the club has some pop in their bats and seeing a grand slam by a rookie gets this guy really excited for what is to come.

Scott Hairston rips the ball for a Grand Slam!

What is happening with these Cubs? I’ll tell you what’s happening; They’re winning. Yesterday, the Cubs walloped the Arizona Diamondbacks 7-2 in a game that launched three home runs each by Alfonso Soriano, Scott Hairston with a grand slam and Cody Ransom. Didn’t the Cubs sign Anthony Rizzo to a huge contract to hit dingers out into the street?

“That’s how you score,” manager Dale Sveum said. “All of our runs were on homers.”

What makes this win so great and special is it’s the Cubs fifth, that’s right, fifth win in a row! Matt Garza gets his first win of the season and the Cubs stretch the margin over the slumping Milwaukee Brewers. Not that they gained ground going up, but you watch and see, this Cubs team is poised to do some damage in the standings.

“We’re playing catch-up to everyone else,” Sveum said. “But it’s still a long season. We’ve seen it before when teams can win 15 in a row, 14 out of 16 … something like that. Then all of a sudden, before you know it, you are right back in it and starting to have a lot of fun.”

Now, even though I was picking on Anthony Rizzo, he’s not the guy to worry about. In fact, this is a great thing when guys like Ransom and Hairston are smacking those things out of the park. Who would have thought the Cubs have a little depth? Nobody did at the beginning of the season. I sure as heck didn’t.

Can they make it six? Jeff Samardzija gets the start today at 7:15 eastern time.

There must be some mojo working at Wrigley Field. it could be the Rolling Stones staying in Chicago, but yesterday Travis Wood belted a Grand Slam Home Run to power the Chicago Cubs to an 8-3 win over their South Side rivals.

Yes, you read it right folks, Travis Wood, pitcher for the Cubs hit a Grand Slam!!!!

That’s his second shot this year.

“We take pride in our hitting and being able to help ourselves out,” Wood said. “We just want to be able to handle the bat so we’re not a dead out. We can try to go out there and eventually help ourselves out and get something going.”

Nate Schierholtz and Luis Valbuena each hit homers in the win.

So, the Cubs won the Crosstown Cup and even though it’s only for bragging rights, it’s a motivator that can probably land them a wild card spot. After all, they’re only 10 games back and if anyone remembers a few years ago when they were 10 games behind at the beginning of August and battled hard to win the division.

They have the potential to do it again.

So, what are the thoughts about Cubs pitchers powering the ball into the streets?

“They hit every day at home, they hit on the road, they have good swings,” Anthony Rizzo said. “It is fun to watch. We just have to get the pitchers up.”

Maybe Travis Wood should hit third in the rotation.

The Cubs have won four in a row heading into today’s matchup against the Diamondbacks. Matt Garza’s on the mound. Game time is 2:20pm eastern.

Matt Garza’s return last night created a lot of excitement for Cubs fans everywhere. It was looking good through four innings and perhaps there was a no hitter in the cards for him, but Andrew McCutchen landed on base, spoiling that. The pirates went on to defeat the Cubs 5-4

Travis Snider walloped a grand slam in the sixth inning off of Shawn Camp and taking the lead 5-3.

The Cubs came within one run in the ninth and was turning into a rally for them, but things came up short when Anthony Rizzo, who was having an unusually off night, struck out swinging.

In all fairness, it was bad luck that the Cubs lost a 3-0 lead going into the sixth. I think part of baseball is those games where everything can be going right and all the momentum is shifting in the right direction, but it takes one pitch to change everything.

The positives to take from last nights gut wrenching loss is again, a pitcher lands on base. Matt Garza hits a double in the second inning to drive Wellington Castillo and Darwin Barney home that gave the Cubs a 3-0 lead.

“Two of our runs were driven in by a pitcher,” Dale Sveum said. “We have to be better and score runs and get those big hits and bust games open.”

Hector Rondon came in for Matt Garza in the sixth inning. maybe it was to ease him in slowly, who knows?

“I had a little nerves that I had to fight off early,” Garza said. “I was disappointed I didn’t go deeper. I don’t like coming out in the fifth. That’s not what I train for, that’s not what I strive to do. It is what it is — I felt great being back out there, but it [stinks] the way it ended.”

You’ll always get the naysayers who scream about, “How can they blow that lead?” but Matt Garza did everything right. In fact, he was down right filthy on the mound.

Baseball isn’t like hockey where a team can out play the opposing team and still get the loss. Baseball has that uniqueness to it that through carefully crafted plays and strategy, that one play can change everything.

There’s always the ninth inning. Other sports, you’re on the clock.

Welcome back Matt Garza, we missed you.