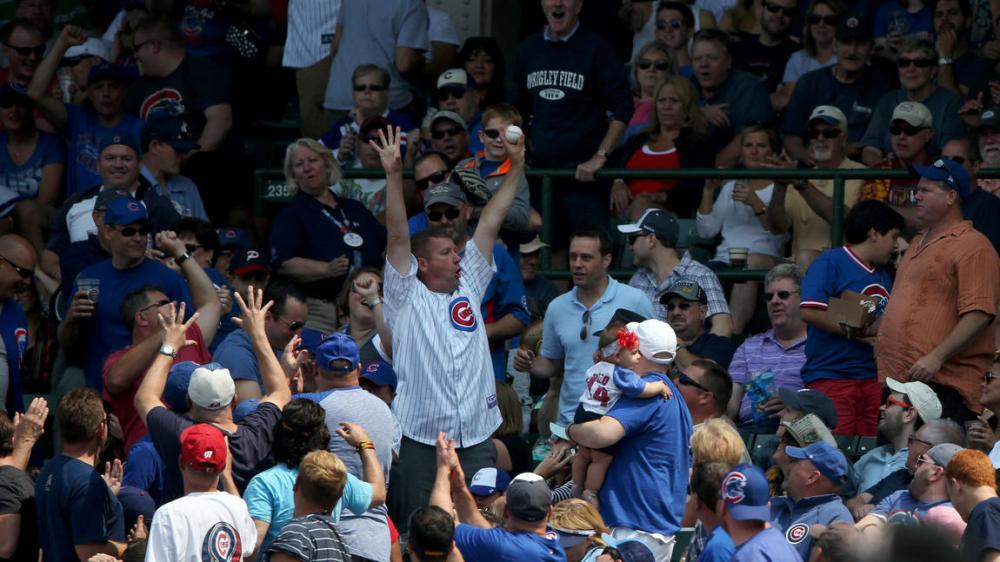 There was a moment in yesterday’s game against the Miami Marlins which summed up the theme of the game. Addison Russell was chasing a foul ball and so was Kris Bryant. Apparently, Addison didn’t see or know that Kris was chasing the ball too because they crashed into each other and nobody caught the ball.

You can almost set up a click bait ad. “Two rookies chasing a foul ball, one rookie doesn’t call off the other rookie and you’ll never guess what happens next.”

“I think that primarily because of the crowd noise, they didn’t hear each other communicate,” Maddon said. “Apparently Russell was calling it and then Bryant called it at the very end, and that’s where the breakdown occurred. But we were able to pitch through it.”

Well, in the end it doesn’t matter, the Cubs lost a close one and left the odd base runners stranded.

What? All right, all right. It’s mid season and this Cub fan has a little cynicism creeping in. The Cubs lost 2-1 and let me tell you, it was a game they could have won. You notice that I refrained from saying “should have” because either team should have won that game but in the end it was those two zingers by Miami that pulled the carpet out from under the Cubs.

Hey, it was nice seeing Harry Caray up singing the seventh inning stretch. It was also great to see Ryan Dempster and Tom Ricketts introduce the song. How many owners do you know that would be on national television with a schooner of beer and chatting it up with a former pitcher.

“One of the things that we think would be really fun is to bring back a number of our departed historic figures, like Harry Caray, Ernie Banks, Ron Santo,” said Cubs president of business operations Crane Kenney. “We want to bring them back to the fans via the video board.”

Speaking of other departed historic figures, I think it would be a great promotional idea to have Steve Bartman sing “Take Me Out To The Ballgame”

Ryan Dempster has got to be one of the coolest guys in baseball. No, not because he’s a fellow Canadian. Last night at the Cubs Convention, he did a comedy shtick a la David Letterman. Some of the hi-lights included a bang up Chris Farley SNL scene as “Matt Foley” motivational speaker.

He burned Jake Arrieta with a no hitter joke as compared to Jon Lester and hit wiffle balls with Anthony Rizzo. Yes, Ryan Dempster has a future in comedy. When asked about the routine, Ryan said,

“I did it in Boston in 2001 for my dad because we go to comedy clubs together and he was there for Father’s Day. I asked the club owner, and it so happened I was on his fantasy team, so he said no problem. I did eight minutes. I was with Florida then, and the guy on stage before me said to make a local reference to win them over. They were doing the Big Dig [a massive highway construction project] then, and I was like, ‘It’s good to be in Boston. I’ve noticed the Big Dig’–everybody cheers–‘and I’ve seen the official state tree of Massachusetts, the three-foot orange cone.”

It’s good to see the light hearted approach the Cubs are taking going into the season. If anything, this year is for the fans. However, apparently some fans decided to boo Edwin Jackson, which isn’t cool. Yeah, he had a bad season last year but I’m sure that he doesn’t need to be reminded of that. C’mon guys, give him a break. 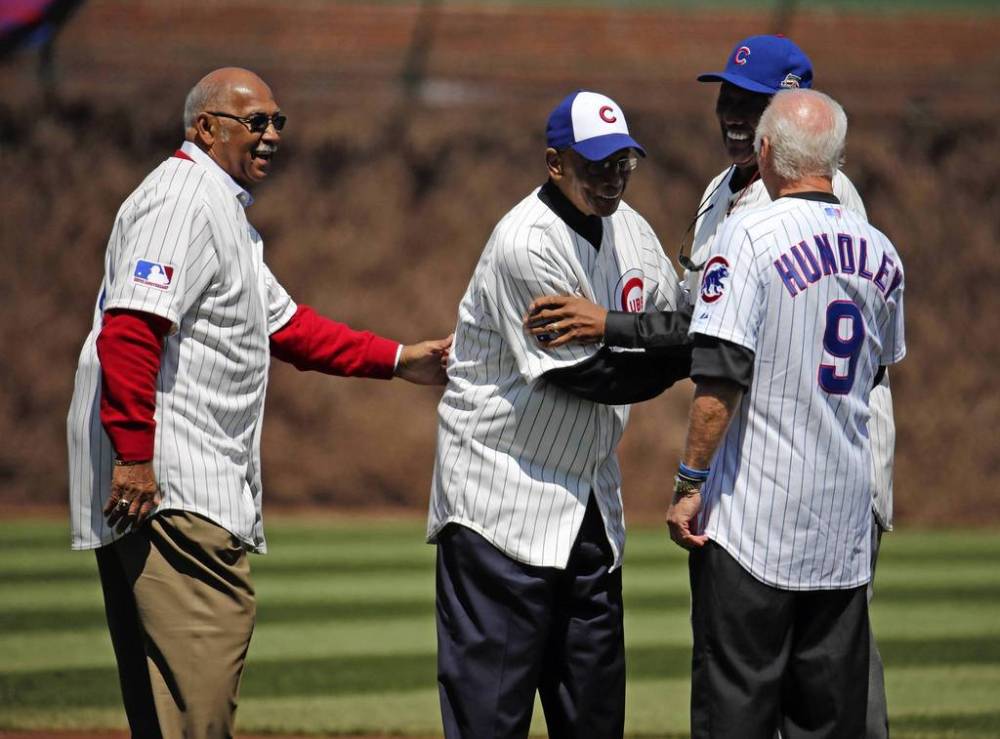 Well ya gotta hand it to the Diamondbacks, they sure do know how to put a damper on a party. The Cubs fell to Arizona 7-5 in extra innings spoiling the Wrigley 100The celebrations.

Jeff Samardzija and Darwin Barney both had great games for the Cubs. The Shark pitched into the eighth inning while Barney posted a run an RBI. The loss spoiled Samardzija’s chances of getting his first win of the season.

“I’m going out and doing my job,” Jeff Samardzija said. “As a starting pitcher, you know when you’re pitching every fifth day and you come out — you have to have a short memory as a pitcher. You start carrying over start to start, that’s when it starts to snowball on you. You keep doing your work and competing for the team and hope for the best.”

Not only was it a throwback game, the Cubs wearing their Chicago Feds jerseys and Arizona sporting the Kansas City Feds shirts, but in a way having Samardzija pitch into the eighth was kind of like an old school game when pitchers went deep a lot more than they do now.

Even though the Cubs lost and don’t misunderstand me, I was just as heartbroken as James Russell was when the D’Backs tied it up, but the loss was a good loss to take even though it is against Arizona. The Cubs got some runs on the board and of course, Samardzija will get his win soon. Darwin Barney improved and Mike Olt pretty much secured third base everyday.

It’s funny, but I was more excited seeing Ryan Dempster back in a Cubs uniform than seeing Banks, Williams and Jenkins. Sure, it was awesome seeing those guys, but I wasn’t around to watch those guys play. Plus, it was exciting to see Andre Dawson. Then again, the Hawk rules!

“The fans are right on top of you here, and you can hear conversations if you’re close enough to the wall,” Dawson said. “You talk back. A lot of things people don’t realize is that you get in conversations with them. You’d be amazed at some of the things you can talk about.”

Wrigley Field is one of those special places that people don’t forget. It’s an icon in architecture and one of the last places in professional sports that connects people in events to times long ago.

Is this heaven? No, it’s Wrigley Field.

After a brutal loss to the Mets, which I won’t repeat the score here, the Cubs came roaring back with an outstanding game for Paul Maholm to take a 4-0 shutout win against their soon-to-be-former rivals, the Houston Astros.

A rain delay was the perfect time to show Kerry Wood’s 20 strikeout game against the Astros in 2008. Talk about throwing salt in the wound.

You know what? This is a great time to be a Chicago Cub and a fan despite their dismal record. All the young guys are getting a chance to strut their stuff for example, Luis Valbuena who hit his third Homer since being called up from Iowa. See what I mean? It’s not all that bad.

Steve Clevenger went 1 for 1 with 2 RBI’s. I tell you folks, the next generation is on their way.

Speaking about the next generation, what are the Cubs going to do with Dempster and Soriano? Will we see a trade with LA Dodgers?

The Dodgers are very much in the hunt and with the Cubs sitting pretty much in the basement, they should trade Dempster for some great prospects. It would give him a chance to get that Ring.

As for Soriano, there’s a rumour going around that the Cubs will eat up his contract in order to move him. I still suspect he’ll be back in the American League.

Thhe Cubs are on the right track and instead of building a team around a seasoned veteran or going for broke and stockpiling the team with over hyped veterans, are you listening Jim Hendry? the Cubs and Theo Epstein are taking off the Band Aid very slowly.

Yesterday, the Cubs beat the Red Sox 3-0 at Wrigley Field.  Yeah, there are trade rumours galore but yesterday, Ryan Dempster showed the fans why he’s the class of the organization. Perhaps, why he’ll be playing for a team that won’t wear a blue cap with a red C on it soon.

Another great thing happenned yesterday, Ryan Dempster scored a triple. His first triple in over 10 years. We all know how good of a bunter Ryan is, but getting a triple?

Now, I’ve written about Dempster a lot recently but the truth be told–He’s been the brightest spot this year. I really hope he lands in Toronto. Then again who knows, he might stay in Chicago. I can’t wait for today’s game.

As trade rumours abound, Ryan Dempster showed why he’s in a class all of his own. Dempster struck out 6 over eight innings to give the Chicago Cubs an 8-2 win over the Twins yesterday.

In a season where pride is key and building a strong foundation into next year, this win was just as important as if it were a win to give them a jump into post season. Or it could be a reason for the Cubs to trade Ryan Dempster. I’ve mentioned before that I wouldn’t want to see Ryan go to another team, but sometimes it’s for the better. The Cubs need a solid rotation but I think they need a couple of more sluggers. The torch has been past to Matt Garza as the veteran pitcher.

There’ll be some money available next year and to tell you the truth, I’m really liking Theo Epstein’s game plan. Judging from the way many fans have been patient this year, it’s a good thing.

So, even though it’s been disapointing this year(although not that bad) the expectations were there to have a bad season.

I remember years ago when the Ottawa Senetors won 10 games and came close to setting an NHL record-now, that was a long season.

I’m waiting for next year’s schedule. Hopefully, the Cubs will play the Jays.

The Cubs lost a close one to the Brewers yesterday. It could be that Dale Sveum knows them all too well or that they just down right got beat by a better team. Ok, nobody’s predicting the Cubs in October and if in the odd chance they do make it, workplaces across America will be empty.

You could say that this year is the type of year that is experimental and to,”See what ya got, kid.” Hey, but that still doesn’t excuse Starlin Castro’s recent mental breakdowns.

I like Dale Sveum and I hope he’s around for a long time.  The key to any great club is stability and to tell you the truth folks, the Cubs haven’t had that stability in a long time. Not in my lifetime anyway.

Cheer up Dale, the Cubs are on their way, Hey Hey!

I mean, there are some bright spots this year in Tony Campana and David DeJesus. They’re fun to watch and that’s a good thing.

Ryan Dempster has said that he’d move if the Cubs asked him. I like Ryan and he’s struggled with the team this year but he needs a new place and I hope he lands in Toronto. Just saying…