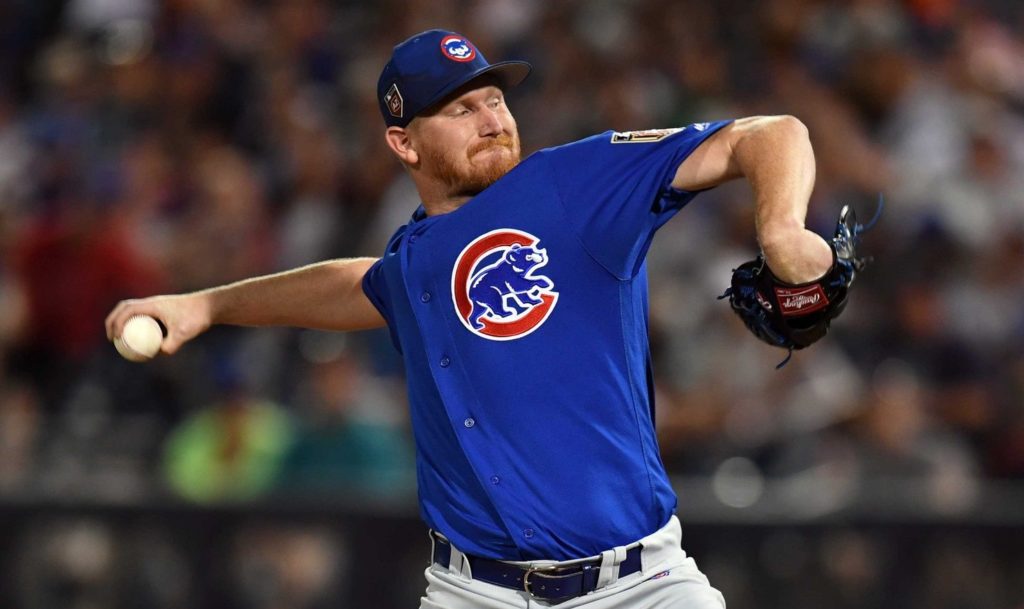 Well, if last night’s performance was any indication on how Eddie Butler‘s season will shape up to be, then hand him a Cy Young because man, did he ever bail out the Cubs in last night’s epic 2-1 loss against the Miami Marlins in 17 innings!

“I knew it from the get go,” Butler said. “I knew it was my game until we got the lead and then we’d hand it over to ‘B-Row’ and he’d take care of business. They came up to me after every inning and asked, ‘How are you feeling?’ and I said, ‘I can keep going, just give me the ball.'”

It was hard fought and I bet you you’re glad for that nifty condensed game feature on MLB.TV because it was a long one, ending just after midnight.

“That was such a huge effort, especially this early in the year, when starters aren’t going so deep into games,” said Cubs starter Kyle Hendricks. Who was no slouch either in his season debut going six innings giving up one run. Butler went one more inning than Hendricks!

It was the longest relief outing for a Cub since Scott Sanderson pitched eight innings in 1989.

The Cubs weren’t hoping to go this deep into games this early into the season, but there you have it. I hope it won’t exhaust the bullpen too much. It was a tight game and one that I’m sure the Cubs are glad is over.

It was a marathon but Kris Bryant notched his first home run of the season and turned in an impressive performance getting three hits and one run plus, well his home run.

Tonight’s the night Cubs fans have been waiting all winter to arrive. Yu Darvish makes his regular season debut and folks, if there’s a pivotal moment in the young season, it’s this one. The season’s going to depend on how well Darvish throws.

“He’s been great, really good,” manager Joe Maddon said earlier in the week about Darvish. “I’ve not been worried in any way, shape or form about performance. That’s not a concern. He’s performed very well. I’m looking for him to be able to adapt and adjust to us, that he feels comfortable here, and he likes it here. I totally believe a guy of his abilities … if he likes the method and the exchange between his manager and his coaches, and his catchers, good things are going to follow.”

So far, I’m blown away by the way the Cubs have opened the season. Last night’s game was a hiccup but if there’s a way to lose, that’s the way to do it. Both teams fought hard and it came down to being tired. Something was going to give. 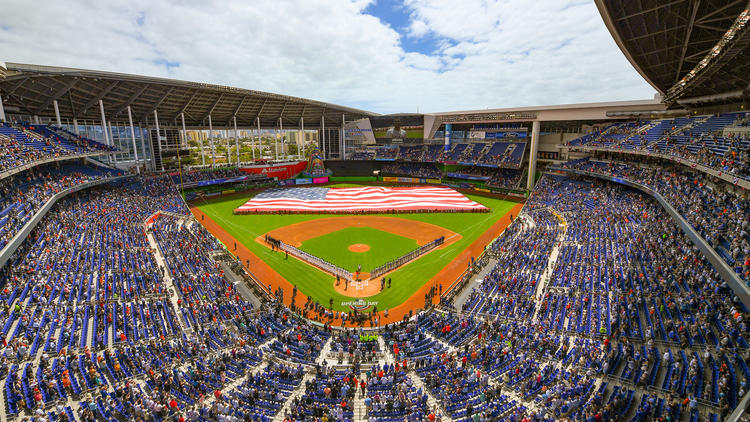 So there you have it. The Chicago Cubs begin the 2018 campaign in style with an 8-4 victory over the Miami Marlins. If there was an omen as to how the season’s going to shape up to be, then look no further to Ian Happ. He crushed a homer at his first at bat of the season, the first pitch of the game and the first pitch of any game of the new season.

Michael Cerami promised to jump into Lake Michigan should Happ accomplish this feat.

Sorry Mike, I’m not jumping into Lake Ontario if Kyle Hendricks pitches a No Hitter tonight.

With the Cubs taking game 1 does this mean we should be getting the parade started? Naw, but as Joe Maddon says,

“To get that win was nice. You’ve got nice pitching coming up. That’s what you look at — here comes Kyle [Hendricks], here comes Yu [Darvish], here comes [Jose Quintana], here comes [Tyler] Chatwood. That makes the difference for me when you can throw good of a quality pitcher every night, it just presents differently to your team.” Maddon said.

I think he’s right on this one. No matter how many home runs the Cubs knock into the stands, this season’s coming down to the pitching. With that rotation, the Cubs should be going deep into the playoffs and hopefully bringing something really special back to Wrigley Field in October.

“It definitely helped me get used to [leading off], especially having the first at-bat in the game,” Happ said of the spring games. “It’s definitely going to be a process. I think I learned more today from the other four at-bats than the first one.”

Then there was Kyle Schwarber and Anthony Rizzo knocking it deep. Baseball is definitely back and it couldn’t come sooner. However, the day brought a sombre feel to it in the wake of the Marjory Stoneman Douglas High School shootings, Rizzo’s Alma Mater.

“I’ve hit a lot of home runs,” Rizzo said. “That was probably the most out-of-body experience I’ve had hitting a home run in my life. It just felt really good. My emotions on Opening Day are usually pretty high, but with all this, you can’t really put it into words. I put my hand on the Stoneman Douglas patch and looked up to those kids up there, the adults who have lost their lives,” he said. “It was a special moment for me personally.”

Opening Day brings special moments to people and if that is the equivalent to Bambino’s “called shot” give me Rizzo’s any day. 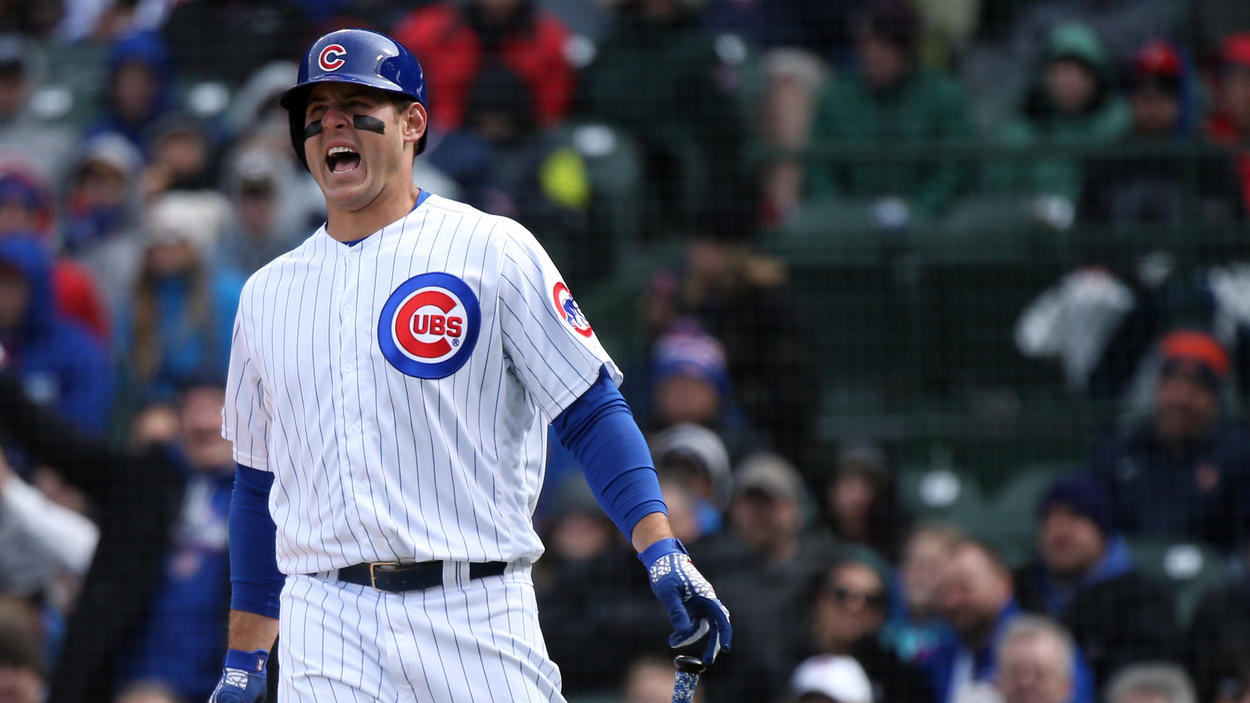 Cubs fans are an insufferable bunch. Not only do they find ways to cling to hope or convince themselves that there were curses when probably there weren’t, I’m not one to throw caution to the wind and tempt fate, if there were curses then probably, there were, so now every Cubs fan from the tips of Florida to Cape Spear (and beyond) are yelling, “This is the year, we’re better than we were in 2016!” Hell, I know, I’m one of them. Ask my wife how many times she’s heard me say, “Yu Darvish, Oh my God the Cubs are going to do it this year!” She’s heard it so much since his signing that sometimes she wakes up in the morning, passes me in the hallway and says,” Ooh, Yu Darvish!” real sarcastically.  It’s really kind of scary the way she says it, now that I think of it. She’s mocking me, but in the back of her mind she knows that the Cubs have become the team to beat in the National League this year.

Maybe I’m the one who’s insufferable. Naw, incorrigible is more like it.

“The camaraderie, the coming together of the group,” Joe Maddon said. “Four years together now, really unique. A unique camp in the way that the guys interacted, meaning they’re getting together as a group, talking about subjects outside of baseball. They’re becoming even better human beings just by interacting with each other.”

People are talking about a Cubs Dynasty in the making. A World Series and three appearances in the NLCS does not constitute a dynasty in my books. In my day, now sit down kids, a dynasty was three championships in a row. Montreal Canadians, Edmonton Oilers, New York Yankees those kind of teams. The Cubs have been impressive but not a dynasty until they win two years in a row( 108 years between championships to where they are now gives them two in a row in my books)

It’s Opening Day. It’s not just about the start of a new baseball season, it’s about new beginnings, new hope and all things that spring eternal. The Cubs team sure do look embarrassingly amazing heading into this season. There’s no more World Series hangovers and players have settled into a groove. Sure, they won the World Series after all those years but heading into this 2018 season, the Cubs are on a quest and not just to pick a spot at Clark and Addison to put the statue of Joe Maddon with the plaque,”We didn’t suck” underneath, but the quest to finally bring a World Series to Wrigley Field.

I’ll leave you with a baseball prayer:

“They’ll come to Iowa for reasons they can’t even fathom. They’ll turn into your driveway, not knowing for sure why they’re doing it. They’ll arrive at your door, as innocent as children, longing for the past. “Of course, we won’t mind if you look around,” you’ll say, “It’s only twenty dollars per person.” And they’ll pass over the money without even thinking about it, for it is money they have and peace they lack. And they’ll walk off to the bleachers and sit in their short sleeves on a perfect afternoon. And find they have reserved seats somewhere along the baselines where they sat when they were children. And cheer their heroes. And they’ll watch the game, and it’ll be as they’d dipped themselves in magic waters. The memories will be so thick, they’ll have to brush them away from their faces. People will come, Ray. The one constant through all the years Ray, has been baseball. America has rolled by like an army of steamrollers. It’s been erased like a blackboard, rebuilt and erased again. But baseball has marked the time. This field, this game, is a part of our past, Ray. It reminds us of all that once was good, and that could be again. Oh people will come, Ray. People will most definitely come.”