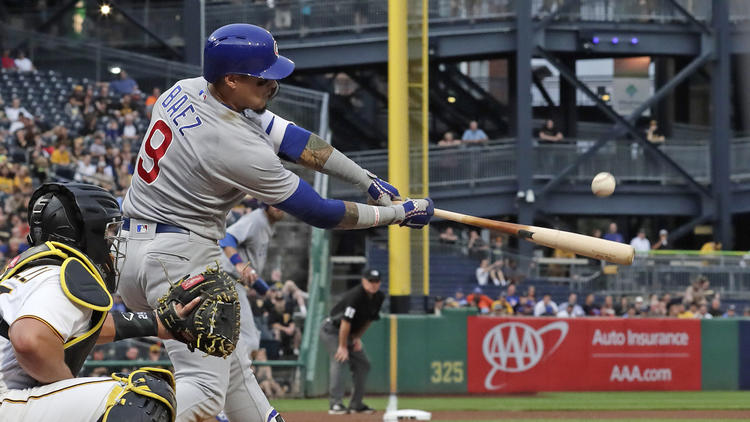 The Cubs are a hopeful bunch, even in last night’s 5-4 loss on the chin to the Pittsburgh Pirates, the Cubs remained hopeful.

“I thought we played really well,” Maddon said of the Cubs’ overall play. “I have no issues with tonight’s game. We got a little unlucky and they beat us. If we play that game every night, I’ll take it the rest of the year. I thought we played that well, the at-bats were good, we played great defense. It’s just one of those nights.”

They did play really well, Javier Baez crushed three hits and a whopper of a three run home run, but it wasn’t enough. I’m still waving that MVP flag for El Mago, he’s truly having that banner year, but after hearing Alex Rodriguez’s comments on Yu Darvish whether they’re true or not, the Cubs have to remain focused and try to do their jobs. It’s true that Darvish wasn’t off to a great start in Chicago and the injury has further aggravated fans and possibly teammates, but we all know that Rodriguez can stir pots whether the brew needs to be stirred or not, tonight Cole Hamels makes his Cubs debut and we’ll know the future of Darvish.

“He loves having the packed ballpark, games that matter,” president of baseball operations Theo Epstein said. “You’re really betting on the person. You acquire someone in the middle of a pennant race in a market like Chicago and you have to pay attention to makeup, because the first time they walk onto the mound at Wrigley, they have the hopes of 24 teammates on them and the whole organization and 45,000 people and a huge market. You want someone who feels good about that opportunity and will embrace it and knows they can rise to the challenge. You don’t want someone who is comfortable where they were and protecting their career and not sure what they got into. The makeup and experience does matter.”

It’ll be in Pittsburgh but his point has been made. Epstein is a smart guy and I’ll trust his decision making skills any day over Rodriguez’s bluntness. The Cubs analyzed the data, that’s what they do. They chose Hamels for a specific reason keeping their eyes solely on October.

“I totally disagree with that. Everyone knows what’s going on. We know there is an injury there. We support his recovery. Everybody in there knows and everyone in the coaches’ room knows also, throughout the organization … It’s unfortunate that it was relayed that way, but it’s not true.” Maddon said about Rodriguez’s comments.